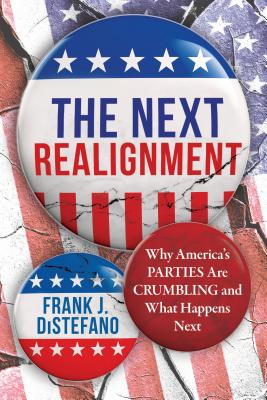 The Next Realignment (Hardcover)

Why America's Parties Are Crumbling and What Happens Next

An astute analysis of today's political chaos showing that the current period of disruptive change is part of a recurring pattern in American politics.

What's happening to American politics? Old political norms seem to be slipping away. Politics has progressively become angrier, new movements keep butting into the public square, and more and more of the unwritten rules that governed American politics for decades have fallen away. Naturally, many are anxious.

Former congressional aide and presidential campaign veteran Frank J. DiStefano argues that this political turmoil feels disquietingly new only because most of us know so little about the history of American politics. In this book, he puts the present era in historical context, showing that America is facing its next realignment, a period of destruction and rebirth in which old political coalitions decay and new parties rise to replace them.

DiStefano explains how the history of past realignments connects to contemporary politics. He examines clashes between Hamilton's Federalists and Jefferson's Democratic-Republicans, the rise of Andrew Jackson, the traumatic collapse of the Whigs, the populist revolt of William Jennings Bryan, and the formation of our New Deal party system of today. He explores America's periodic explosions of moral crusading called great awakenings. He clarifies the real ideas and philosophical forces that make up our politics, from liberty and virtue to populism and progressivism, showing how their interaction is now remaking our parties into something new.

Will this realignment be a quick renewal as we adapt our politics for a future with new problems, or do we face years of disruption, dangerous movements, and chaotic politics before we rebuild? This book shows that, with a knowledge of history, all of us can help shape the politics of the coming decades and restore our trust in the American Dream.

Frank J. DiStefano is a writer living in Washington, D.C. He was employed as a Republican congressional aide during the Contract with America years of the 1990s and has worked on political campaigns, including helping to shape the policy agenda of Rudy Giuliani's 2008 presidential campaign as Deputy National Political Director for Issues. He is also a former litigator at Washington, D.C.'s elite Williams and Connolly firm. DiStefano has an undergraduate degree in politics from Princeton University, a law degree from Georgetown University, and he served as a law clerk on the United States Court of Appeals for the Fourth Circuit.

Praise For The Next Realignment: Why America's Parties Are Crumbling and What Happens Next…

"A bold and deeply informed interpretation of our present moment. Anyone interested in trying to understand the present state of American politics should read this book.”

“Frank DiStefano does the near impossible. He combines a fascinating, thoughtful, insightful history of today’s dysfunctional, shrinking two-party system with an exciting vision of the future.”

“Anyone who thinks Americans are stuck with the current two-party system has not studied American history. Frank DiStefano does a wonderful job of looking backward to help us look forward. We don’t know when the next major political realignment is coming . . . but it is coming.”

—Charles Wheelan, professor of public policy at Dartmouth College, and author of The Centrist Manifesto

“DiStefano carefully situates today’s ripeness for partisan realignment in the context of historical precedent. He makes a strong case that we stand at the precipice of partisan change during this unique moment in history. The New Deal–era principles that have driven our two major political parties have waned, leaving these parties in search of new messages to propel them into the future. DiStefano portrays the United States as currently poised to make the wrong decision, but he also offers an optimistic solution that I hope Americans will heed.”

“The Next Realignment reads like a political thriller whose characters include the most fascinating actors to stride the stage of American history. After reading this essential book, you will never again look at American politics and political parties in the same way. With crisp prose, fast-paced stories, and often brilliant insights into the connections between policy and politics, the book’s most important contribution is to reframe any coming political alignments as opportunities for everyday Americans to force parties to deal with the future in new ways. DiStefano convincingly argues that the future is in our hands, and that we can—and we must—seize the opportunity to make our politics and our parties meet our needs as a nation and live up to our great democracy’s potential.”

“DiStefano resuscitates realignment theory to offer a sober and engaging perspective on the current partisan bickering afflicting our politics. He makes a strong and convincing case that partisan alignments formed during the New Deal era are no longer able to provide solutions to pressing national problems. The only way this conflict will be resolved is through a wholesale realignment of our two major parties, and all signs point to this transformation occurring sooner rather than later. A must-read for scholars of political history—as well as for concerned citizens looking for a way out of our political nightmare.”

—Antoine Yoshinaka, associate professor, Department of Political Science, University at Buffalo, author of Crossing the Aisle: Party Switching by US Legislators in the Postwar Era, coeditor of American Gridlock: The Sources, Character, and Impact of Political Polarization

"How did we get here? Where are we going? Frank DiStefano, a sharp legal mind with presidential campaign experience, takes us on a crisp sweep through history to present this necessary guide for the transformations that lie ahead. This is a must-read for those seeking a preview of the next act of the great American story."