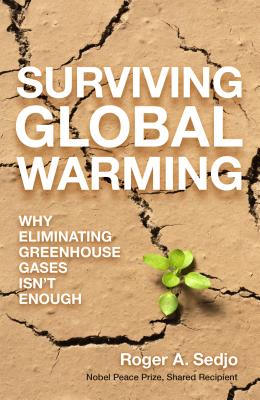 This provocative and important overview of the challenges of and possible approaches to climate change by an expert and shared recipient of a Nobel Peace Prize is essential reading for policy makers, climate scientists, and lay persons alike.

Though the Paris Agreement on climate change was a significant achievement, most authorities agree that its measures to reduce greenhouse-gas emissions will be insufficient to offset the forecasted increase in global warming. Even in the unlikely case of ideal compliance, the Earth will still experience major climate-driven damages. Given this reality, climate expert Roger A. Sedjo argues in this book that a Plan B is required. He makes a compelling case that doing more of the same, by focusing only on the mitigation plan of the Paris Agreement, will leave humanity increasingly vulnerable; instead, we must also begin planning adaptation strategies--Plan B--which enable societies to anticipate and protect against the worst effects of inevitable climate change.

The author examines several areas where environmental damage could be severe. Sea-level rise is a major concern and measures could be, and in some cases are now being, undertaken to protect coastal areas. The author also addresses the need for more robust action to ward off the likely decline in agricultural productivity, destruction of forests and biodiversity, and the impact of natural catastrophes like hurricanes made worse by climate change. In addition, he considers geo-engineering strategies, such as atmospheric reflectivity, which may play a role in lessening the impact of global warming.

“Surviving Global Warming is provocative and very possibly monumental in its visionary message that more than current thinking is needed to properly address climate change.”

“Dr. Sedjo provides a unique, enduring, and sorely needed perspective on climate change. His take, born of his many years doing policy research on climate change and natural resource issues, is that adaptation is as important as mitigation in climate policy. Unfortunately, the public almost never hears that we need to also be on the parallel path of adaptation. Given how hard it has been to constrain our carbon emissions globally, this parallel path may, in fact, be the most important insurance we can buy!”

“Let us face the facts: Fossil fuels provide more than three-quarters of world energy needs. Electricity production in large countries like China and India is based on coal. Quick transition to a carbon-free world is unattainable. This book presents an intriguing road map for businesses, governments, municipalities, and citizens. Roger Sedjo suggests that we must scale up the action taken after the hurricane in Puerto Rico to the global level. If we cannot prevent climate change, we must adapt. Adaptation to climate change does not need to wait for international agreements; individuals, too, can move ahead along the lines Dr. Sedjo discusses in this book. If there is one book that you need to read about climate change, this is that book.”

“Roger Sedjo—distinguished natural resource economist and climate-policy scholar for four decades—has written a book on climate-change policy that intelligently draws attention to adaptation rather than solely focusing on the mitigation of greenhouse gases (GHGs). He usefully discusses climate history over the last two millennia and shows the power of human adaptation. His focus on natural climate-change forces, less well understood than GHG warming, has significant implications for climate policy within and among nations. The book recognizes the political and economic limits of a global mitigation policy, thus bringing adaptation policies to the forefront. Surviving Climate Change deserves to be added to the contentious debate over climate policy. It is a wise and well-written book.”

—Dean Lueck, professor of economics, and director of the Program on Natural Resource Governance at the Ostrom Workshop, Indiana University

“With his characteristic combination of no-nonsense reasoning and clear exposition. . .  Sedjo has tackled the challenging issue of adaptation to climate change. While this topic was verboten at the end of the last century and the beginning of this one, the author cogently argues that on political, technical, and scientific grounds the world will not be able to successfully mitigate the dire consequences of climate change. Hence an auxiliary approach, Plan B, is required to adapt to the inevitable changes. With this volume, Sedjo provides an accessible overview of the issues associated with this challenging undertaking.”

Roger A. Sedjo, PhD, is a Senior Fellow Emeritus at Resources for the Future, a Washington, DC resource and environmental think tank, and he is director of RFF's Forest Economics and Policy Program. Sedjo shared the Nobel Peace Prize in 2007 for his work on the IPCC Climate Assessments, numbers 2, 3, and 4. He also received an honorary doctorate from the State University of New York College of Environmental Science and Forestry, as well as numerous other awards and fellowships including a PERC Fellowship, German Marshall Plan Fellowship, and Sloan Foundation Fellowship. He has written or edited fifteen books related to forestry and natural resources as well as hundreds of peer-reviewed papers. Sedjo has served on the EPA Scientific Advisory Board addressing questions of carbon regulations for biomass energy. In addition, he has consulted or worked with the World Bank, UNDP, Asian Development Bank, USAID, OECD, FAO, IIED, IIASA and other international organizations. Born in Chicago, Illinois, he lives in Oro Valley, Arizona.
or support indie stores by buying on