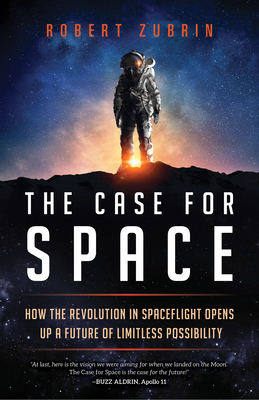 The Case for Space

A noted space expert explains the current revolution in spaceflight, where it leads, and why we need it.

A new space race has begun. But the rivals in this case are not superpowers but competing entrepreneurs. These daring pioneers are creating a revolution in spaceflight that promises to transform the near future. Astronautical engineer Robert Zubrin spells out the potential of these new developments in an engrossing narrative that is visionary yet grounded by a deep understanding of the practical challenges.

Fueled by the combined expertise of the old aerospace industry and the talents of Silicon Valley entrepreneurs, spaceflight is becoming cheaper. The new generation of space explorers has already achieved a major breakthrough by creating reusable rockets. Zubrin foresees more rapid innovation, including global travel from any point on Earth to another in an hour or less; orbital hotels; moon bases with incredible space observatories; human settlements on Mars, the asteroids, and the moons of the outer planets; and then, breaking all limits, pushing onward to the stars.

Zubrin shows how projects that sound like science fiction can actually become reality. But beyond the how, he makes an even more compelling case for why we need to do this--to increase our knowledge of the universe, to make unforeseen discoveries on new frontiers, to harness the natural resources of other planets, to safeguard Earth from stray asteroids, to ensure the future of humanity by expanding beyond its home base, and to protect us from being catastrophically set against each other by the false belief that there isn't enough for all.

Praise For The Case for Space: How the Revolution in Spaceflight Opens Up a Future of Limitless Possibility…

“At last, here is the vision we were aiming for when we landed on the Moon. The Case for Space is the case for the future!”

"Zubrin’s opinions and ideas are bold and his expertise, passion, and enthusiasm are in evidence throughout . . . . This title will be a hit with space-travel enthusiasts and researchers alike."

“Zubrin is one of our generation’s thought leaders in space exploration, and with The Case for Space he makes another major contribution to humanity’s journey to the stars. . . . A must-read for every human being who dares to look up at the sky and imagine that someday we too will be ever present there.”

“The tools needed to move into space have radically changed in the last decade. Robert Zubrin has put together an excellent guide on how we got these amazing new machines and how we can now use them to break out into the solar system for the benefit of everyone. Highly recommended.”

“Zubrin lays out a vision for our space program whose boldness and clarity of thought we have not seen since we took on the challenge of reaching for the Moon. This is the kind of thinking we need. Nothing great has ever been accomplished without courage.”

“An exciting vision for the future of humanity in space.  The narrative explains a practical, albeit challenging, path to the stars in the tradition of Mars Direct. "

“One thousand years from now, whatever the human race has evolved into, we will look back and see the next few decades as the moment in time that the human race irreversibly moved off the Earth and to the stars. Why should we do that? It is our moral obligation, and in The Case for Space, Zubrin creates one of the most powerful and coherent arguments to date. This is a must-read for anyone who cares about the survival of our species.”

“Zubrin is a respected evangelist for manned spaceflight. This fascinating book—a distillation of his decades of expertise—combines a lucid exposition of future technologies with an eloquent and inspiring vision of humanity’s future as a space-faring species.”

—MARTIN REES, Astronomer Royal, past president of the Royal Society, and author of On the Future

“Beyond this tiny speck whirls a universe—truly everything. All who want their heirs to share some of that should read Robert Zubrin’s fact-filled call for a push beyond our planet. As it happens, out there lie the tools, resources, and keys to saving our earthly garden home.”

Robert Zubrin (Golden, Colorado) is president of Pioneer Astronautics and also president of the Mars Society. For many years he worked as a senior engineer for Lockheed Martin. In addition, he is the author of many critically acclaimed books, including Mars Direct, How to Live on Mars, The Case for Mars (with Richard Wagner), Entering Space, Mars on Earth, Energy Victory, Merchants of Despair; the science fiction novels The Holy Land and First Landing; and articles in Scientific American, the New Atlantis, the New York Times, the Washington Post, Mechanical Engineering, and the American Enterprise. He has appeared on major media including CNN, CSPAN, the BBC, the Discovery Channel, NBC, ABC, and NPR.
Loading...
or support indie stores by buying on
(This book is on backorder)