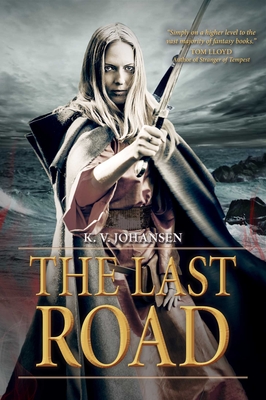 The Last Road (Gods of the Caravan Road #5)

When even the gods are dying, the hope of the world may lie in its most feared enemies. A new god proclaimed as the All-Holy has arisen in the west and leads an army eastward, devouring the gods and goddesses of the lands between, forcibly converting their folk and binding their souls to himself. The very fabric of the world appears threatened by forces beyond the understanding of scholars and wizards alike. Even the great city of Marakand, where the roads of east and west converge, seems powerless to resist the All-Holy, though the devils Moth and Yeh-Lin and the assassin Ahjvar, undead consort of the god of distant Nabban, have come to stand with it. That may avail Marakand little, for the shapeshifting Blackdog, once a champion of the gods, follows obediently at the All-Holy's heel and Lakkariss, the sword of the cold hells, is in his master's hand.

Praise For The Last Road (Gods of the Caravan Road #5)…

Johansen’s writing is as lyrical and captivating as ever, and this may just be – fittingly – the best-crafted book of the series, the author inhabiting her world so comfortably, her characters so surely... The world of the Gods of the Caravan Road is one of the richest, most vibrant, most real worlds I’ve had the pleasure to visit.
— Fantasy Hive

A superbly crafted action/adventure novel by a master of the heroic fantasy genre.
— Midwest Book Review

K. V. Johansen is the author of Blackdog, The Leopard, The Lady, and Gods of Nabban, volumes 1-4 of the Gods of the Caravan Road series, and numerous works for children, teens, and adults. She predominantly writes secondary-world fantasy but is also the author of some science fiction and literary criticism, and of a collection retelling medieval Danish ballads. With an artist friend, she is also working on a manga-style adaptation of a short story set in the Blackdog world. Johansen has an MA from the Centre for Medieval Studies at the University of Toronto. Her lifelong interest in ancient and medieval history and the history of languages has had a great influence on her writing and world building. Occasionally, she masquerades as an editor, freelance journalist, or book reviewer, and dabbles (infrequently) in illustration. She lives in New Brunswick, Canada with a moderately wicked dog.
Loading...
or support indie stores by buying on