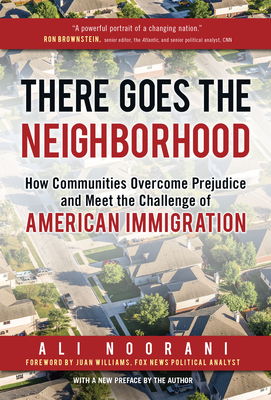 A leading advocate for immigration reform interviews a wide range of citizens from communities throughout the nation to gauge the level of acceptance of new immigrants.

This compelling approach to the immigration debate takes the reader behind the blaring headlines and into communities grappling with the reality of new immigrants and the changing nature of American identity. Ali Noorani, the Executive Director of the National Immigration Forum, interviews nearly fifty local and national leaders from law enforcement, business, immigrant, and faith communities to illustrate the challenges and opportunities they face. From high school principals to church pastors to sheriffs, the author reveals that most people are working to advance society's interests, not exploiting a crisis at the expense of one community. As he shows, some cities and regions have reached a happy conclusion, while others struggle to find balance.
Whether describing a pastor preaching to the need to welcome the stranger, a sheriff engaging the Muslim community, or a farmer's wind-whipped face moistened by tears as he tells the story of his farmworkers being deported, the author helps readers to realize that America's immigration debate isn't about policy; it is about the culture and values that make America what it is. The people on the front lines of America's cultural and demographic debate are Southern Baptist pastors in South Carolina, attorneys general in Utah or Indiana, Texas businessmen, and many more. Their combined voices make clear that all of them are working to make America a welcome place for everyone, long-established citizens and new arrivals alike.
Especially now, when we feel our identity, culture, and values changing shape, the collective message from all the diverse voices in this inspiring book is one of hope for the future. Now in paperback with a new preface.

“Engaging…. Noorani does a masterful job of describing how communities have learned to value the contribution of immigrants and to resist demands to round up undocumented immigrants and instead seek a real-world solution to the problem.”

"An essential book to understand the fear, challenges, and opportunities on both sides of the immigration debate.... This book, in many ways, explains why Trump won the election and why an honest debate on immigration is urgent. Your neighborhood depends on it."

“Noorani has brought unlikely allies together in faith, law enforcement, and business communities to find common ground on the complex issue of immigration, helping neighborhoods adjust to, and even embrace, their changing identities and welcome newcomers eager to contribute to our nation’s economy. This is must-reading for all Americans who want to understand where we go from here, and why we must continue to be a nation of immigrants to make America truly great.”

“As America grapples with issues of identity, culture, and belonging, Noorani brings us a book that combines personal experience, data, and current events to tell a story of a country transformed. How we navigate this tumultuous time will be a testament to the deeply held American values of inclusion and integration. On the heels of a national election that brought to the forefront questions of what it means to be American in the twenty-first century, this is a captivating account of the challenges and promising practices across the country that give us hope for the future. This is not a book about immigration. It is a book about a country transformed by technology, globalization, and demographic shifts. This insightful look into how communities across America have responded gives us hope that we can move beyond ideology and divisiveness. There Goes the Neighborhood is a blueprint for moving forward.”

Ali Noorani is the Executive Director of the National Immigration Forum, an advocacy organization promoting the value of immigrants and immigration. Prior to joining the Forum, Noorani was Executive Director of the Massachusetts Immigrant and Refugee Advocacy Coalition, and has served in leadership roles within public health and environmental organizations. In 2015, Noorani was named a lifetime member of the Council on Foreign Relations.
Noorani is a sought-after commentator, and has been interviewed by the New York Times, the Washington Post, the Economist, the Associated Press, and by several other national, regional, and international media. He is also a frequent guest on a range of television and radio shows, including MSNBC, Lou Dobbs Tonight, The O'Reilly Factor, the Sean Hannity Show, Washington Journal, PBS Newshour, Fusion Magazine, NPR (the Diane Rehm Show, On Point, and Marketplace), and is an op-ed contributor to CNN.com, Fox News's Latino, among others. Noorani is a regular guest on local talk radio shows across the country.
Loading...
or
Not Currently Available for Direct Purchase