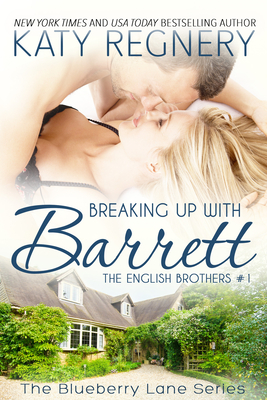 Breaking Up with Barrett

Breaking Up with Barrett is the first book about the Philadelphia-based, wildly-handsome English brothers who are all on the look-out for love.

(Except Alex. He's a womanizing manwhore. And maybe Stratton, because he's wicked hot, but super awkward around girls.)

Barrett English, aka "the Shark," is the fair-haired, first-born of the English brothers, and the CEO of the oldest, most prestigious investment banking firm in Philadelphia. He rules the boardroom with an iron fist, refusing to take no for an answer and always getting his way.

Emily Edwards, a first-year doctoral student at the University of Pennsylvania, grew up in the gatehouse on the outskirts of Barrett's childhood estate. The daughter of his family's gardener and housekeeper, she was always looking through the window of privilege, but forced to remember her place at the very periphery of the kingdom.

When business partners suggest that a fiancée might soften Barrett's image over business dinners, he approaches Emily for the "job" of fiancée . And while love wasn't necessarily on Barrett's radar, he begins to realize that Emily always has been. But will his take-no-prisoners boardroom tactics work on the heart of the woman he loves?