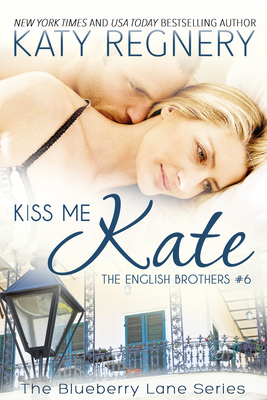 Kiss Me Kate is the sixth book about the Philadelphia-based, wildly-handsome English brothers (and one lovely cousin!) who are all on the look-out for love.

Kate English, cousin to the beguiling English Brothers, has relocated to Philadelphia and now works with her cousins at English & Company. The problem with moving to Philly? It was where Kate met her first love, Etienne Rousseau. Since the move, Kate can't seem shake the painful memories of a romance that broke her heart.

Etienne Rousseau, neighbor and arch-enemy of the English family, is recently single and has every intention of enjoying his newly-minted bachelor-status. That is...until his brother inks a deal with English & Company, forcing Etienne to work with his one-time lover, Kate English. Though he wants to hate the girl who once destroyed his life, he can't deny the fierce attraction or hide the deep tenderness he still feels for Kate.

With vibrant flashbacks of their passionate, teenage love affair making it impossible to ignore their unresolved history, Kate and Etienne will commit to unraveling the secrets of their heartbreaking past to make way for a breathtaking future.

New York Times and USA Today bestselling author Katy Regnery started her writing career by enrolling in a short story class in January 2012. One year later, she signed her first contract and Katy’s first novel was published in September 2013.
Twenty-five books later, Katy claims authorship of the multi-titled, New York Times and USA Today Blueberry Lane Series, which follows the English, Winslow, Rousseau, Story, and Ambler families of Philadelphia; the six-book, bestselling ~a modern fairytale~ series; and several other standalone novels and novellas.
or
Not Currently Available for Direct Purchase