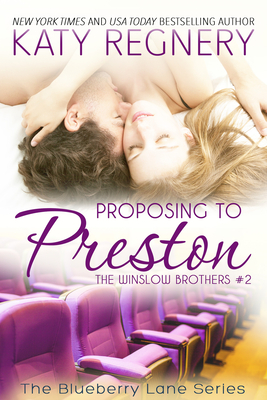 Proposing to Preston is the second of book about the Philadelphia-based, wildly-handsome Winslow brothers who are all on the look-out for love.

(Except Brooks... he's probably sailing around the world with Skye by now. And Cameron, who's having too much fun sparring with Margaret to think about love. And Christopher, who's only on the look-out for a congressional seat and absolutely. nothing. else.)

Preston Winslow has a heart as open as the sky and room in his life for someone special. When he falls in love with Broadway actress, Elise Klassan, he holds nothing back.

Elise, who has made tremendous sacrifices to forward her career, is swept off her feet by handsome, charming Preston...but the stage has been her first love for so many years, she doesn't know if there's room for Preston in her life. When the day comes that she must choose between her ambition and her heart, she profoundly hurts the one man who could have made her happy.

Two years later, Elise has become a world-famous actress and Preston is a very successful lawyer. But fame has not equaled happiness for Elise, and Preston is much too bitter and cynical to ever consider falling in love again.

Is it possible that the only person who can mend Preston's heart is the one who originally broke it? Only if Elise can figure out a way to make him believe in love all over again.