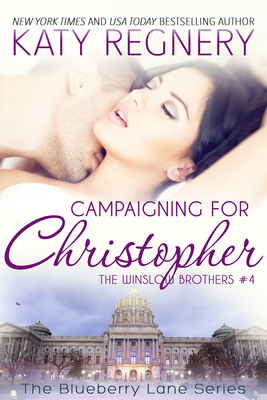 Campaigning for Christopher is the fourth book about the Philadelphia-based, wildly-handsome Winslow brothers who are all on the lookout for love.

(Eeek. Oops. Except...no, they're not. Brooks has his Skye, Pres and Elise are happily married, and Cam and Meggie are scorching the earth at the Five Sisters. Hmm. That only leaves...)

Christopher Winslow, the youngest of the four Winslow brothers, was born with a silver spoon in his privileged mouth, which has made it difficult for him to establish his credibility in the fast-approaching congressional race. Working against the clock to assure Pennsylvania voters that he is forthright, trustworthy and able has been an exhausting challenge, but Christopher's chances at beating the incumbent look good.

Julianne Crow, a plus-size model struggling to make ends meet, jumps at the chance to make a little extra cash on the side. What does she have to do? Slip something into Christopher Winslow's drink and take some very naughty pictures with him.

But Christopher is nothing like Julianne expected, and when her actions sabotage his hard-earned campaign only a month before the election, her guilt is overwhelming. She offers Christopher her help in an effort to repair the damage she's caused, but can anything change the fact that he sees her as an opportunist and a mercenary? When she starts campaigning for Christopher, he may find out there's more to her than meets the eye.

Return to the world created in the English Brothers books with this fresh foursome of scorching hot Winslow Brothers!