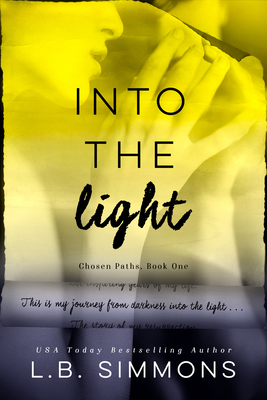 Into the Light (Chosen Paths #1)

When Aubrey Miller begins her education at Titan University, she is no longer the beautiful, blonde-haired, blue-eyed girl of her youth. In fact, she’s no longer even Aubrey Miller. Now with jet-black hair, multiple sets of eccentric contact lenses, and several facial piercings, she’s veiled herself in complete darkness as a form of protection for herself, as well as others.

As she enters her first year of college, her goal is simple: earn a degree with the least amount of social interaction as possible. What she never anticipates is the formation of very unlikely relationships with two people who will change her life in ways she never believed possible: Quinn Matthews, the overtly cheerful pageant queen, and Kaeleb McMadden, a childhood friend who never really let her go.

Over the years, as their connections intertwine and strengthen, a seemingly indestructible bond is formed between the three. And eventually, the ties of friendship and discovery of first love begin to coax her from her darkened path as they slowly bring Aubrey back to life.

Spanning the course of four years, this is the story of a young woman’s plight to finally reemerge,finding strength within unbreakable bonds as she delivers herself from her own manufactured darkness and safely back . . . Into the Light.

After graduating from Texas A&M University, L.B. Simmons did what any biomedical science major could do. She entered the workforce as a full-time chemist. Years later, never in her wildest dreams would she have imagined herself a USA Today Bestselling contemporary romance author as well.

What began as a memoir for her children, ended up being her first self-published book, Running on Empty. Soon after, her girls were given reoccurring roles in the remainder of what became the Mending Hearts series.

L.B. Simmons doesn’t just write books. With each new work, she attempts to compose journeys of love and self-discovery so she may impart life lessons to readers. She’s tackled suicide, depression, bullying, eating disorders, as well as physical and sexual abuse, all the while weaving elements of humor into the storylines in effort to balance the difficult topics. Often described as roller coaster rides, her novels are known for eliciting a wide range of emotions in each story she tells.