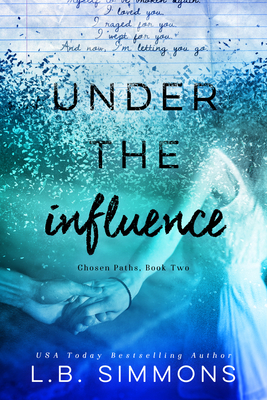 Under the Influence (Chosen Paths #2)

By the age of thirteen, Dalton Greer had already experienced abuse unfathomable to most. So by the time he was finally rescued from the latest of his long string of foster homes, he was traveling down a dangerous path. Indebted to a known drug lord as a means of protection, he chose the life of the streets thinking that was all his life had to offer…until he met her. Five years later, she’s the only bright spot in his very bleak existence. There isn’t anything he won’t do to shield her from the evil he’s experienced, and he wants nothing more than to protect her from the life he’s chosen.

The day Spencer Locke found Dalton sitting on her porch, she felt his pain and understood his rage. They were bonded by both, though he would never understand why.

He had been lost while she was found, and in that moment, she vowed to help him find his way too. As the years pass by, their initial bond transforms into something deeper. Spencer loves Dalton regardless of his past, and in spite of his choices. When all secrets are unleashed between the two, that love becomes binding.  One night is all they have before fate makes its own decision. Dalton is forced to choose the path he will travel, and Spencer is left not knowing why. A story about the journey from true friendship into the blossoms of first love, the experiences of crucial sacrifice and ultimate betrayal, and the endurance of agonizing heartbreak on the way to finding lasting redemption, two souls find solace... Under the Influence of love.

*****Due to themes of child abuse, domestic violence, sexual situations and explicit language, recommended for readers 17+*****