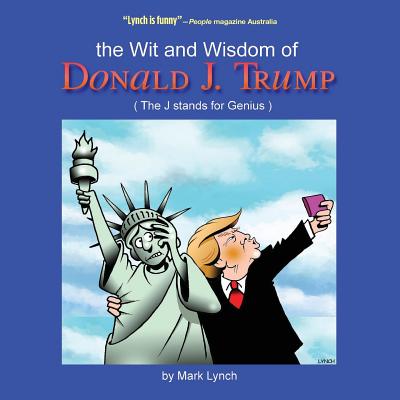 The Wit and Wisdom of Donald J. Trump

(The J. Stands for Genius)

When Donald Trump speaks and tweets, the world holds its breath. He vents his spleen at anything and anyone at anytime. His use of social media to message his innermost thoughts and often galvanize his, (as Hilary puts it) 'Basket of Deplorables' following, makes for unmissable reading, no matter what your political views.

This is a collection of 83 full-color hilarious cartoons, along with the Commander in Tweet's most outrageous claims, quotes, mis-quotes, alternative facts and 'I can't believe he said that ' moments.

"My IQ is one of the highest - and you know it Please don't feel so stupid or insecure; it's not your fault." --Donald Trump

Cartoonists had a genuine God-send with the election of Donald J. Trump, and here, one of their legion, Mark Lynch, let's his pen and paint off the leash in this book, to lambaste, body-shame and parody the self-described genius. We suspect the President won't be endorsing this collection, because it's, 'Hair Raising '