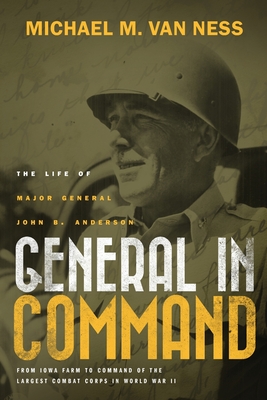 The Life of Major General John B. Anderson

"In General In Command, Van Ness presents a vivid biography of Major General John B. Anderson and his rise to the top. --Ambassador Frank Lavin, author of Home Front to Battlefront: An Ohio Teenager in World War II

Prime Minister Winston Churchill crossed the Rhine River on March 25th, 1945. His presence was calculated to emphasize the British role in the defeat of the Germans and to divert attention away from Patton and the Americans who had crossed the Rhine at Remagen two weeks earlier.

Supreme Allied Commander Dwight Eisenhower had warned his commanders that Churchill would seek to steal the limelight. Eisenhower ordered his commanders to refuse any requests to cross the Rhine; "The answer must be NO " But when Eisenhower and Bradley left, the Prime Minister seized his chance. This photograph caught the moment and was printed on the front page of newspapers around the world.

Once again, the wily Prime Minister had captured the world's attention at the expense of the Americans. The joint American, Canadian, and British operation appeared to be primarily a triumph of British arms. Eisenhower, Bradley, and Patton were furious. Eisenhower could do nothing about the Prime Minister, but he never forgave the American generals involved. And General Eisenhower had other things on his mind.

In the meantime, General in Command: The Life of Major General John B. Anderson is his triumphant story from the Iowa cornfields to command of the largest combat corps in Europe in the Second World War.