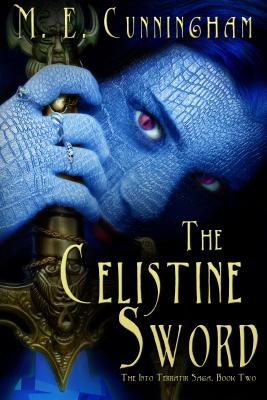 The Into The Terratir Saga, Book Two

She found the perfect boyfriend in a land of wonder and enchantment. To find him again, Lauren Marriott is going back to the mysterious world of Terratir, but instead of being a dream come true, it turns into a nightmare of demonic proportions.

Zach Marriott will now take his rightful place as the last and only Ancient in the land of Terratir… or so he thinks. One crisis after another threatens to distract him. Will he be able to save himself, let alone the magical realm he has come to love?

Lauren and Zach are once again immersed in the perilous world of the Warlord, only this time, the Warlord isn't the problem. Something worse awaits them—something terrifying and indestructible. They must make a choice… slay their most-beloved friend or risk the destruction of the world of Terratir by a monster made flesh.

M.E. Cunningham came from a land, far, far away, and ended up on a little farm in northern Utah, living with numerous magical creatures: horses, chickens, dogs, cats, and a goat. Cunningham began writing quite by accident, the fall through the fabric of time dropped M.E. into the mysterious land of Terratir. Terratir is not the first magical realm Cunningham has discovered, but it is the only one to be written about so far. Favorite topics include ghosts, monsters, dragons, and magic. Cunningham also likes TV, going to the movies, and camping in the mountains as long as there are no spiders, mosquitoes, or ticks. Cunningham’s first book, Reluctant Guardian, was published in August 2013. While always in search of the strange and unexplainable, this author will write each story as it is discovered. Be on the look out!
Loading...
or
Not Currently Available for Direct Purchase