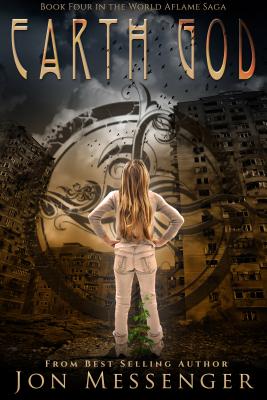 THE EARTH GIVES WAY TO THE SEA,

THE SEA BOWS BEFORE THE WIND,

THE WIND FEEDS THE FLAME,

THE FLAME BURNS THE WORLD OF MAN DOWN TO THE EARTH.

The Fire Elemental has risen and its followers, the Fire Caste, have destroyed the planet. Humanity hangs on the cusp of extinction; their only hope now lies with the troubled Wind Warrior, Xander Sirocco.

Xander has absorbed the power of the Wind and Water Elementals but at great personal cost. Finding Sammy has been his anchor through the chaos around him, but now he finds himself wondering if saving her is enough.

Sammy remains a prisoner of the Fire Elemental, her mind trapped, as the dragon possesses her body. Her love for Xander keeps her going, but will her passion be enough to stop the Elemental from killing Xander once and for all?

It's a race against time between Xander and the dragon to claim the last of the Elemental power and bring an end to a war that's spanned millennia.

Earth God is the exciting conclusion to the bestselling and award-winning World Aflame series.

Jon Messenger (Born 1979 in London, England) serves as an United States Army Major in the Medical Service Corps. Since graduating from the University of Southern California in 2002, writing Science Fiction has remained his passion, a passion that has continued through multiple combat and humanitarian deployments. Jon wrote the Brink of Distinction trilogy, of which Burden of Sisyphus is the first book, while serving a 16-month deployment in Baghdad, Iraq.