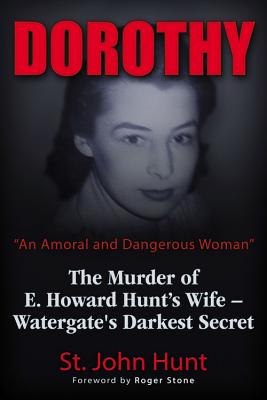 Dorothy, "An Amoral and Dangerous Woman"

Dorothy Hunt, “An Amoral and Dangerous Woman” tells the life story of ex-CIA agent Dorothy Hunt, who married Watergate mastermind and confessed contributor to the assassination of JFK. The book chronicles her rise in the intelligence field after World War II, as well as her experiences in Shanghai, Calcutta, Mexico, and Washington, DC. It reveals her war with President Nixon and asserts that she was killed by the CIA in the crash of Flight 553. Written by the only person who was privy to the behind-the-scenes details of the Hunt family during Watergate, this book sheds light on a dark secret of the scandal.

"In his heartfelt memoir, Dorothy, St. John Hunt, the son of E. Howard Hunt, reveals startling and unknown details about the Watergate scandal. Dorothy exposes dangerous truths – it was an act of courage to write it." —Mark Lane, author, Citizen Lane

"Was the fatal 1972 plane crash that killed her intended to prevent Mrs. Hunt from telling what she knew about Watergate and other secrets, including the JFK assassination? Who better to present the thrilling story of the intrigue surrounding this woman than her son?" —Jim Marrs, author, Crossfire: The Plot That Killed Kennedy

"Dorothy reads like a gripping spy novel and you are wise to have selected this title. I have no doubt that Saint John Hunt will continue to help us uncover the hidden history of the United Sates and the truth shall set us free." —Roger Stone, author, The Man Who Killed Kennedy: The Case Against LBJ

"I and many others strongly suspected this was a case of cover-up by murder."  —Jim Marrs, author, Crossfire: The Plot That Killed Kennedy

"Dorothyis a fascinating story of love, intrigue and espionage. Dorothy Hunt’s key role in Watergate and mysterious death have never been fully examined, until this book. Dorothy reads like a novel and is a gripping spy thriller as well as a true story of untold history." —Eric Hamburg, producer, Nixon

St. John Hunt is the son of former CIA operative E. Howard Hunt. In 1972 his father was arrested for Watergate and his mother Dorothy was killed in a plane crash. He is the author of Bond of Secrecy. He lives in Miami. Roger Stone is a political consultant, lobbyist, and strategist, and the author of The Man Who Killed Kennedy: The Case Against LBJ and Nixon’s Secrets: The Rise, Fall and Untold Truth about the President, Watergate, and the Pardon. He lives in New York City.
Loading...
or
Not Currently Available for Direct Purchase