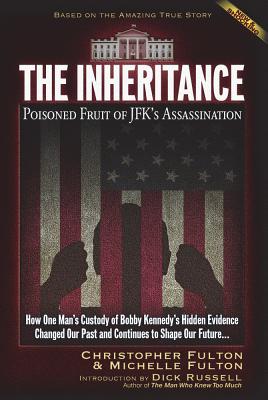 Christopher Fulton's journey began with the death of Evelyn Lincoln, late secretary to President John F. Kennedy. Through Lincoln, crucial evidence ended up in Christopher's hands—evidence that was going to be used to facilitate a new future for America. But the U.S. government's position was clear: that evidence had to be confiscated and classified, and the truth hidden away from the public. Christopher was sent to federal prison for years under a sealed warrant and indictment. The Inheritance, Christopher's personal narrative, shares insider information from his encounters with the Russian Government, President Ronald Reagan, Donald Trump, the Clinton White House, the U.S. Justice Department, the Secret Service, and the Kennedy family themselves. It reveals the true intentions of Evelyn Lincoln and her secret promise to Robert Kennedy—and Christopher's secret promise to John F. Kennedy Jr. The Inheritance explodes with history-changing information and answers the questions Americans are still asking, while pulling them through a gauntlet of some of the worst prisons this country has to offer. This book thrillingly exposes the reality of American power, and sheds light on the dark corners of current corruption within the executive branch and the justice and prison systems.

At the height of his success in commercial construction in Canada, Christopher Fulton was extradited and sent to U.S. federal prison for his possession of physical evidence in JFK's assassination. He currently resides in California. Michelle Fulton was born in Vancouver, Canada. She earned her Bachelor of Music Degree from the University of British Columbia. She resides in California with her husband, their two children, and their rescue dogs.

Praise For The Inheritance: Poisoned Fruit of JFK's Assassination…

"When Christopher Fulton buys a gold Cartier watch that belonged to JFK and was part of the original assassination materials, it sets in motion something he never saw coming. A real page-turner. This book and the information in it is simply explosive. It changes everything I thought I knew about this period in time of American history. It's shocking. A must read." —Valerie Shampine, consumer reviewer

"Christopher Fulton's personal story The Inheritance places the puzzle pieces of the Kennedy assassination in proper order, giving us all a clear mosaic. I didn't want to believe what is contained in the pages of The Inheritance, but Fulton's narrative has what most books published about the assassination of the 35th President of the United States do not: The solid Ring Of Truth." —William Matson Law, William Law's decades of research on the Kennedy assassination has appeared in more than 30 books, including Douglas Horne’s Inside the Assassination Records Review Board. He has written, produced, directed, or consulted on documentaries and films like RFK, The Gathering, and Killing Kennedy.

"It is a page turner that rips the myth off America and shows you how desperate our government is to use lies to control us. I recommend this book. I highly recommend it. This is the best book of the year, as far as I am concerned." —Ruth's Report, https://ruthsreport.blogspot.com/2018/11/the-inheritance-poisoned-fruit-of-jfks.html

"I just finished reading this book. You should read it too. It's about how what went on then is still going on, but you don't know it until it happens to you." —Daniel Hopsciker, author of Barry and the Boys, and Welcome to Terrorland

"If the book, The Inheritance, is correct, then the JFK assassination was a American coup d’état—under which we still live." —Governor Jesse Ventura, former Governor of Minnesota, Professional Wrestler, Actor and Author
or support indie stores by buying on
Copyright © 2020 American Booksellers Association