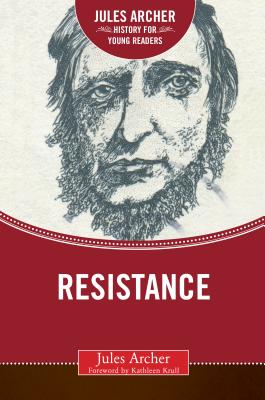 Is resistance un-American? How far should resistance go? Courage and desperation have sparked instances of resistance since the dawn of civilization. Jesus, Thoreau, Gandhi, and Martin Luther King resisted the nonviolent way. Here for the record is a remarkably full discussion of instances of twentieth-century resistance to inform, inspire, and possibly instruct by example. Here are the frightening, inspiring stories of the anti-Nazi, anti-Communist, anti-war, anti-discrimination movements, and the individuals who have faced up to oppressors.

“Resistance must begin with the self,” the author concludes—with the courage to say no when everyone expects us to say yes. Here, a well-known reporter of the deeds of dissenters, revolutionaries, rebels, and gadflies calls on his vast resources of observation and sympathy to help us take heart and turn the tide against our sea of troubles.

Jules Archer was one of the most respected names in nonfiction for young people. During his lifetime he published over seventy books, which have been translated into twelve languages throughout the world. He lived in Scotts Valley, California until his death in 2008.

Kathleen Krull left her career as an editor in 1984 to turn to writing, most recently the Women Who Broke the Rules series. Her more than sixty books have garnered starred reviews and awards, and the Children’s Book Guild of Washington, DC, honored her with its Nonfiction Award for her body of work that “has contributed significantly to the quality of nonfiction for children.” She lives in San Diego, California.
Loading...
or
Not Currently Available for Direct Purchase