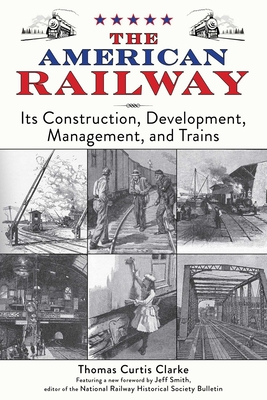 Its Construction, Development, Management, and Trains

The early history of the American railroad by the man the New York Times calls “one of the best-known civil engineers in America.”

The American Railway provides an exciting look at the railroad industry in the 1880s and how it developed as the business boomed. Originally published in 1889, it contains a thorough history of how railroads were built, the types of railways, the lives of railway workers, the various ways the railway affected political and business economics, as well as the safety precautions of people who rode or worked with the railway system. You’ll also find more than two hundred hand-drawn illustrations—visual representations of great steam engines, graceful bridges, life in a Pullman car, railway accidents, views of track construction, and portraits of railroad pioneers and magnates of the times—and stories from real rail workers. Learn how far we’ve come from such humble beginnings and grow to have a newfound appreciation for the railways that paved our country’s future. This edition features a new foreword by Jeff Smith, editor of the NRHS Bulletin, the quarterly magazine published by the National Railway Historical Society.

Thomas Curtis Clarke was one of the most widely known railway engineers in the mid to late 1800s, behind the construction of several bridges and elevated railroads of New York. Upon his death in 1901, he was considered by the New York Times as “one of the best-known civil engineers in America.”
Loading...
or
Not Currently Available for Direct Purchase