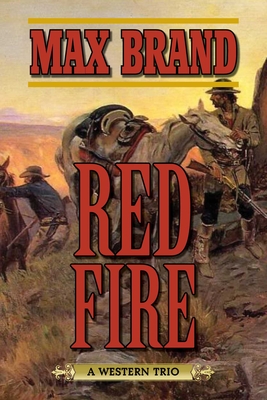 From legendary Western author Max Brand comes a collection of stories about a slave, a jewel thief, and a captive.

In “Master and Man,” Bobbie is a black man who can outride, outfight, and outshoot any white man in the mountain desert. His unwavering moral code serves as a model for his often cruel and dissolute white master.

“A Lucky Dog” is a tale of the desperate flight of a jewel thief named Hagger from the man he robbed. In Colorado, facing a battle with winter cold and snow, he comes upon an isolated cabin and its sole occupant, a weakened bull terrier left there to starve to death. The man and dog come to depend on each other—to a point where Hagger would make any sacrifice and endure any hardship just to keep the dog alive.

In the title story, “Red Fire,” Paul Torridon, called White Thunder by the Cheyenne Indians, and his girlfriend, Nancy Brett, are being held prisoner by the Cheyenne because they believe he can cure illness and bring rain. While Roger Lincoln, a frontiersman who has known Torridon since the early days of his feud with the Brett clan, devises a plan for their escape, Torridon’s captors take every precaution they can to keep him imprisoned, even if it means killing him rather than losing him.

“Brand's stories are just as exciting today as they were yesterday.” —Publishers Weekly

“Brand's stories are just as exciting today as they were yesterday.” —Publishers Weekly

Max Brand is the best-known pen name of Frederick Faust, creator of such beloved characters as Destry and Dr. Kildare. Eighty motion pictures and many radio and television programs have been based on his work. Faust went to Italy as a war correspondent during World War II after the United States entered the conflict, and was killed during a night attack on a hilltop village held by the German army. His literary output was so prolific during his life that he averaged three new books per year for seventy-five years, including many years after his death.
Loading...
or
Not Currently Available for Direct Purchase