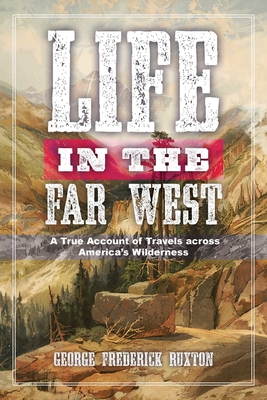 Life in the Far West

George Frederick Ruxton was an explorer and adventurer extraordinaire. Born in England in 1820, he followed in his family’s footsteps and entered the military at the age of thirteen. He quickly became a decorated soldier, serving in Spain, where he fought for Queen Isabella II in the Carlist civil war and was made a Spanish knight at seventeen, as well as in Ireland and Canada. But the rigidity of military life was not for him. In 1843 Ruxton followed his wanderlust; he sold his commission and roamed freely for a season through the remote woods of southern Canada and northern New York, hunting and living off the land.

Ruxton never forgot his travels through remote America, and, after journeying through Africa, he would return in 1847. Starting in Mexico and the new American southwest territories, Ruxton would go on to travel more than two thousand miles, finally reaching present-day Colorado. Upon returning to England, Ruxton, using the pen name La Bonté, would begin to detail his travels through articles under the title Life in the Far West.

First published in book form in 1849, Life in the Far West describes the amazing true adventures of George Frederick Ruxton as he forges a path through the yet-untamed wilderness of a young America, seeing firsthand the relationships between the US Army and Comanche Indians and the incredible lifestyles of Colorado mountain men. With a literary style that makes it feel more like a novel than the true account it is, Life in the Far West is the compelling and ambitious account of a true explorer.

George Frederick Ruxton was born near Oxfordshire, England, in 1820. Joining the military, he would earn distinction and the Laureate Cross of Saint Ferdinand in the Spanish Civil War. After leaving the army, he journeyed across Africa, Mexico, and the United States, describing his travels in articles for Blackwood’s Magazine. He is also the author of Ruxton of the Rockies.
Loading...
or
Not Currently Available for Direct Purchase