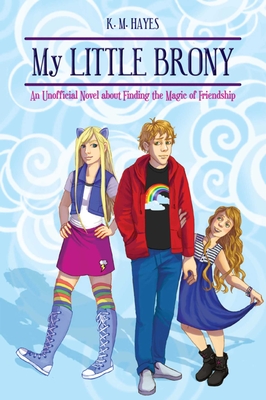 An Unofficial Novel about Finding the Magic of Friendship

Drew Morris doesn’t just feel like an outsider in his football-crazed Texas town—he actually is. He sucks at sports, even though his dad is the high school football coach. And his supposed “teen growth spurt” has yet to be seen, so he’s sure his freshman year will be filled with seniors stuffing him in lockers.

However, Drew is spared from the bullying he expects. Instead, a girl named Skye—who constantly dons horse ears and talks about My Little Pony—becomes everyone’s target. Drew feels bad for her, but he’s not about to stand up and take her place. At least not until he discovers what these My Little Ponies are all about.

Babysitting his younger sister one night, Drew is forced to watch My Little Pony: Friendship Is Magic. Much to his surprise, he finds himself actually paying attention to the show . . . and maybe even wanting to watch another episode after his sister is in bed. As school drags on, lonely and boring, he keeps sneaking episodes on his tablet until he has watched every single one. Not only that, but he’s even started drawing the ponies in his spare time. He knows if anyone finds out how much he likes the show, he’ll be a dead man walking like Skye.

As it becomes harder to keep his secret while he has to watch Skye get bullied for the one thing that has made him happy all year, Drew faces some important choices. Read about Drew’s search for friends and self-acceptance in My Little Brony.

Sky Pony Press, with our Good Books, Racehorse and Arcade imprints, is proud to publish a broad range of books for young readers—picture books for small children, chapter books, books for middle grade readers, and novels for young adults. Our list includes bestsellers for children who love to play Minecraft; stories told with LEGO bricks; books that teach lessons about tolerance, patience, and the environment, and much more. While not every title we publish becomes a New York Times bestseller or a national bestseller, we are committed to books on subjects that are sometimes overlooked and to authors whose work might not otherwise find a home.

As a Brony, K. M. Hayes jumped on the chance to write about characters who share the same passion for My Little Pony. Hayes has always had a deep love for good animation in all forms and believes MLP is one of the best examples of American animation and storytelling. And, of course, watching MLP makes Hayes 20 percent cooler, which can’t hurt. Hayes resides in Fremont, California.
or
Not Currently Available for Direct Purchase
Copyright © 2020 American Booksellers Association