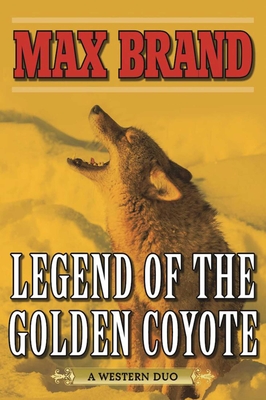 Legend of the Golden Coyote (Paperback)

“Thunder and Lightning” is the story of two men, Soapy Almayer and Jimmy Clarges. When they go to work in a lumber camp, their extraordinary strength and the speed that they work leads to their being called Thunder and Lightning. Then one man, afraid to fight either, is crafty enough to use Rosita Alvarado to cause them to fight each other … to the death.

“Legend of the Golden Coyote” is the story of a wild coyote, known far and wide for his unusual golden coat. Crafty and ferocious, he will confront even a timber wolf. But he also has a special relationship with a man and his daughter: the girl loves him and the man has spared his life when he might have killed him. When a terrible forest fire threatens them all, the golden coyote faces the painful choice between saving one of his own offspring and leading the human to safety.

Max Brand is the best-known pen name of Frederick Faust, creator of such beloved characters as Destry and Dr. Kildare, among others. Eighty motion pictures and many radio and television programs have been based on his work. Faust went to Italy as a war correspondent during World War II after the United States entered the conflict, and he was killed during a night attack on a hilltop village held by the German army. His literary output was so prolific during his life that he averaged three new books per year for seventy-five years, including many years after his death. He lived in Hollywood, California.
or support indie stores by buying on
Copyright © 2020 American Booksellers Association