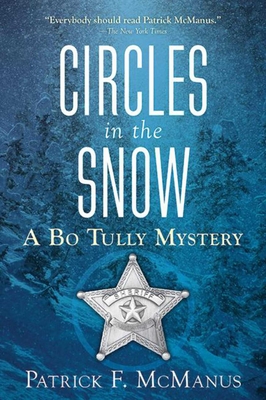 Circles in the Snow (Paperback)

Bo Tully, Sheriff of Blight County, Idaho, has dealt with small-town crime throughout his long, storied career. Now, contemplating retirement after years on the job, Tully is faced with perhaps his most perplexing case yet. When area bald eagles start getting picked off by a ghost-like killer, and when a prominent local rancher is murdered by an arrow with eagle fletching, things gets complicated fast. In this fast-paced whodunit, Tully has a vast array of suspects to chose from—including the rancher’s gorgeous, bird-loving wife who mysteriously leaves for a ranch in Mexico the day of the murder; the beautiful chef at the local house of ill repute, who is well-known as a budding ornithologist; and the ranch foreman, who is rumored to be having an affair with his boss’s widow.

Will Tully put the pieces of the puzzle together, yet again? Will sending his dad, the former sheriff of Blight County, along with his number two man, down to Mexico help solve the mystery? And what about the mysterious large circles in the snow that Tully finds around the ranch—with no footprints leading in or out of the area?

It all adds up to another engrossing series of twists and turns. And in the end, Tully gets his man . . . or woman . . . or does he?

Patrick F. McManus is a humor writer who began writing as an undergrad at Washington State University. Hundreds of his humor articles have been published in magazines such as Field & Stream and Outdoor Life. He has published more than a dozen humor books, several mysteries, and a children’s humor book. Among his recent works are The Tamarack Murders, The Horse in My Garage, Kerplunk!, and The Huckleberry Murders. He lives in Spokane, WA.

Praise For Circles in the Snow: A Bo Tully Mystery…

“Everybody should read Patrick McManus.” —The New York Times

“Everybody should read Patrick McManus.” —The New York Times

“Series fans will appreciate this affectionate send-off.”—Publisher’s Weekly
or
Buy Here
(This book is on backorder)
Copyright © 2020 American Booksellers Association