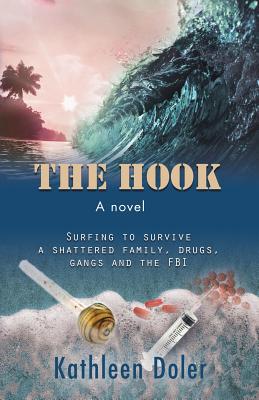 Surfing to Survive a Shattered Family, Drugs, Gangs and the FBI

THE HOOK: After three years away, Dana, a globe-trotting journalist, reluctantly returns to her foggy coastal hometown, Half Moon Bay. She’s been running away all of her adult life, from the mental illness and chaos that defined her childhood. Now her junkie brother, a former surf star, is tangled up with a brutal meth dealer and he’s in the hospital. Dana and Shane bonded over surfing as teenagers, frequenting local breaks, including THE HOOK, to escape their violent and damaged family. Dana’s father and brother walked away from Shane years ago, unwilling to deal with his volatility and drug use. But she just won’t give up on him. As Dana turns to her friends and the tight-knit surfing community for help she confronts her brother’s illegal activities and nearly homeless existence. But that’s just the beginning … a drug kingpin is chasing Shane and then Dana, the FBI are involved, a gang war is building, and a new family crisis is brewing. Meanwhile Dana’s gut-wrenching and frightening journey forces her to face her ruinous childhood, her inability to sustain relationships and her struggle to move on with her life.

Kathleen Doler was born and raised in Santa Cruz, California, and she graduated from U.C. Santa Cruz. She’s an author, journalist and adventure sports addict. She spent 20 years as a business reporter and editor in Silicon Valley. Now she works as a freelance journalist for national newspapers and magazines, covering everything from business and finance to helicopter skiing, surfing and scuba diving. She also travels extensively, mostly to wild places, often while pursuing sports that have the potential to maim her. She owns a wardrobe of wetsuits.
Loading...
or
Not Currently Available for Direct Purchase