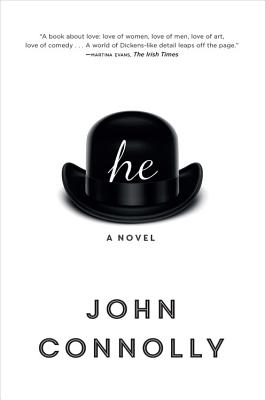 John Connolly conjures the Golden Age of Hollywood in this moving, literary portrait of Laurel & Hardy--two men who found their true selves in a comedic partnership.

An unforgettable testament to the redemptive power of love, as experienced by one of the twentieth century's greatest performers.
When Stan Laurel is paired with Oliver Hardy, affectionately known as Babe, the history of comedy--not to mention their personal and professional lives--is altered forever. Yet Laurel's simple screen persona masks a complex human being, one who endures rejection and intense loss; who struggles to build a character from the dying stages of vaudeville to the seedy and often volatile movie studios of Los Angeles in the early years of cinema; and who is haunted by the figure of another comic genius, the brilliant, driven, and cruel Charlie Chaplin.

Eventually, Laurel becomes one of the greatest screen comedians the world has ever known: a man who enjoys both adoration and humiliation; who loves, and is loved in turn; who betrays, and is betrayed; who never seeks to cause pain to anyone else, yet leaves a trail of affairs and broken marriages in his wake. But Laurel's life is ultimately defined by one relationship of such astonishing tenderness and devotion that only death could sever this profound connection: his love for Babe.

"Ambitious . . . Written in spare, fractured prose from the perspective of a narrator who seems to be reporting from inside Laurel's mind . . . Evoke[s] the style of Samuel Beckett."—Jason Zinoman, The New York Times

"There is little here of the lovable innocence of [Stan Laurel's] screen persona. Instead we are shown a troubled, difficult man who drinks heavily, screws up his relationships with women, and broods about the unmatchable genius of Charlie Chaplin . . . Laurel is never referred to by name, only as 'he,' but every other man in the book has his name written out in full. Initially disconcerting, the usage soon comes to seem no more than a further reflection of the originality of this fine novel."—Nick Rennison, The Sunday Times

"It's not often you get an evocation of a friendship so deep and tender between two men in fiction . . . A wonderful story of love, of unabiding loyalty."—Declan Burke, RTE

"John Connolly has skillfully recreated the unseen side of a perceived golden age and yet it is also a compassionate study of the tensions between commercial demands and popularity and the almost unattainable artistic integrity gifted people destroy themselves in pursuit of; for all that it is no less a love letter to one of the most enduring and beloved partnerships in cinema history."—Malachy Coney

"Rewarding and uplifting. Connolly has stepped outside the crime genre to publish a literary novel of real merit."—Nudge Books

"An invaluable feel for a period and a fascinating, if awkward, personality. Writing the story as a novel rather than just a straight biography gives the tale an extra layer of humanity and reality."—Crime Time

"Charts the evolution of comedy in Hollywood during its first half century with a keen eye to detail . . . An entertaining account of early-twentieth-century celebrity and the two men whose lives to posterity 'have become reflections, each of the other, an infinity of echoes.'"—Huston Gilmore, The Daily Express