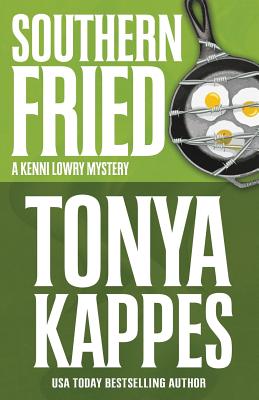 In the South, it's better when the food is fried and the secrets kept buried...After the dead body of a beloved Cottonwood resident is found tangled up in an electric fence, Sheriff Kenni Lowry has a hunch that somethin' ain't right. Her investigation heats up with a fierce cook-off competition, a euchre game where the intel is sweeter than the brownies, and a decades old family recipe that may just be the proof in the pudding.

The icing on the cake: Kenni is fighting an attraction to her recently sworn-in deputy sheriff, and election season is hot on her tail. When the killer comes after who she holds most dear, even her poppa's ghostly guidance might not be enough to keep her and her own out of the frying pan.

"Kappes captures the charm and quirky characters of small-town Kentucky in her new mystery...a charming, funny story with exaggerated characters. The dialect-filled quirky sayings and comments bring those characters to life. Best of all, for a mystery reader, the culprit was an unlikely suspect, but the solution made sense." - Lesa's Book Critiques (on Fixin' To Die)

Part of the Henery Press Mystery Series Collection, if you like one, you'll probably like them all...

Author Bio: Tonya Kappes has written over 20 novels and 4 novellas, all of which have graced numerous bestseller lists including USA Today. Best known for stories charged with emotion and humor, and filled with flawed characters, her novels have garnered reader praise and glowing critical reviews. She lives with her husband, three teenage boys, two very spoiled schnauzers, and one ex-stray cat in Kentucky.