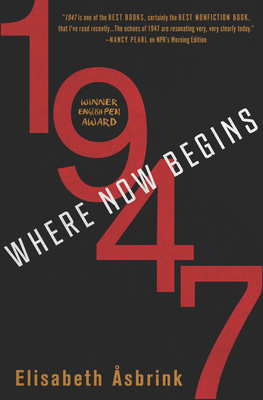 An award-winning writer captures a year that defined the modern world, intertwining historical events around the globe with key moments from her personal history.

The year 1947 marks a turning point in the twentieth century. Peace with Germany becomes a tool to fortify the West against the threats of the Cold War. The CIA is created, Israel is about to be born, Simone de Beauvoir experiences the love of her life, an ill George Orwell is writing his last book, and Christian Dior creates the hyperfeminine New Look as women are forced out of jobs and back into the home.

In the midst of it all, a ten-year-old Hungarian Jewish boy resides in a refugee camp for children of parents murdered by the Nazis. This year he has to make the decision of a lifetime, one that will determine his own fate and that of his daughter yet to be born, Elisabeth.

“[A] gripping history…[Åsbrink’s] careful juxtaposition of disparate events highlights an underlying interconnectedness and suggests a new way of thinking about the postwar era.” —The New Yorker

“Åsbrink deftly brings together the tangle, the mess, the aspirations, and the disappointments which characterized the period and which for her resonate personally through her family history.” —Rosemary Ashton, author of One Hot Summer: Dickens, Darwin, Disraeli, and the Great Stink of 1858

Elisabeth Åsbrink is a nonfiction writer and journalist. She has worked for Swedish National Television for fifteen years as a reporter and editor for news shows and cultural programs, often as an investigative journalist. Her first book, Och i Wienerwald står träden kvar [And in the Vienna Woods the Trees Remain], received worldwide attention for revealing new information about IKEA founder Ingvar Kamprad’s ties to Nazism. It won several awards, including the August Prize for Best Swedish Non-Fiction Book of the Year (2011). Åsbrink made her debut as a playwright with RÄLS [TRACKS], based on the minutes taken at a meeting convened by Hermann Göring in 1938, and has since written four plays.

Fiona Graham studied Modern Languages at Oxford University and has worked as a translator and editor at the European Parliament and the European Commission. She translates from Spanish, French, Dutch, Swedish, and German, and is currently the reviews editor at the Swedish Book Review.
Loading...
or support indie stores by buying on
(This book is on backorder)