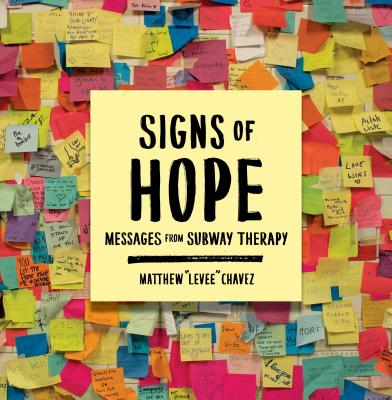 A deeply moving and inspiring collection of notes from the most expressive wall in the world.

In the days and weeks after the 2016 presidential election, Matthew Chavez showed up in the subway with stacks of brightly colored sticky notes. "Express yourself," he told passersby. The response was electric. Calling himself "Levee"--one who supports the city's emotional tide--Chavez turned an underground maze into a communal art space known as Subway Therapy.

News and social media feeds around the world filled with images of this ever-changing, ever-growing wall of remembrances, messages of love, and fierce calls to action. And its spirit was catching. Thousands picked up the mantle to create Subway Therapy walls in cities across the country--San Francisco, Oakland, Seattle, Boston, Washington, D.C.--and internationally as well.

Signs of Hope is Chavez's tribute to Subway Therapy, showcasing the most inspired and most inspiring of the thousands of 3 x 3 inch notes. Individually these brave and funny and emotional "posts" bring the personal and momentary into the open. Together, they show us a vision of inclusivity and hope.

A portion of the author's proceeds will go to the ACLU (aclu.org), supporters of free speech in all its forms, and Win (winnyc.org), the largest provider of shelter and services to New York's homeless families.

Matthew “Levee” Chavez is the creator of Subway Therapy, an ongoing immersive project in the subway stations of New York City that has been awarded the Municipal Art Society's 2017 Brendan Gill Prize. A believer in the therapeutic power of communication, he has worked in the field of education in a variety of different roles, including at a magnet school for students with autism. He lives in Brooklyn.


Praise For Signs of Hope: Messages from Subway Therapy…

"In "Signs of Hope: Messages from Subway Therapy" (Bloomsbury), Mr. Chavez recalls why and how supposedly complacent New Yorkers and visitors were encouraged to post thousands of kaleidoscopic sticky notes that celebrate free speech and--in contrast to the song's lament about "people hearing without listening"--demonstrate the healing potential of ordinary people expressing themselves." - New York Times

"Nearly a year after the election, Chavez is bringing those inspiring notes to your coffee table with the release of Signs Of Hope: Messages from Subway Therapy, out now . . . [A] vibrant reminder that you are not alone in your pain, your grief, and your anger, and that resistance is fueled by the collective hope of those who believe the future will be better." - Bustle

"An international symbol of unity and expression." - The Washington Post on "SUBWAY THERAPY"

"One of the most significant public expressions of emotion in response to the election results . . . The notes will not be forgotten." - The New York Times on "SUBWAY THERAPY"