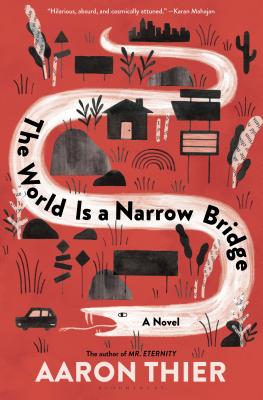 The World Is a Narrow Bridge

“A book that looks at existence with equal measures of fear, humility and gratitude. In a time when novelists tend to be more concerned with psychology than the soul, that makes it a rare and valuable thing.” --Sam Sacks, Wall Street Journal

From the author of Mr. Eternity, a darkly comic road novel about a millennial couple facing the ultimate question: how to live and love in an age of catastrophe.

Young Miami couple Murphy and Eva have almost decided to have a baby when Yahweh, the Old Testament God, appears to Eva and makes an unwelcome demand: He wants her to be his prophet. He also wants her to manage his social media presence.

Yahweh sends the two on a wild road trip across the country, making incomprehensible demands and mandating arcane rituals as they go. He gives them a hundred million dollars, but he asks them to use it to build a temple on top of a landfill. He forces them to endure a period of Biblical wandering in the deserts of the southwest. Along the way they are continually mistaken for another couple, a pair of North Carolina society people, and find themselves attending increasingly bizarre events in their names. At odds with their mission but helpless to disobey, Murphy and Eva search their surroundings for signs of a future they can have faith in.

Through wry observations about the biggest things--cosmology and theology--and the smallest things--the joys and irritations of daily life--Thier questions the mysterious forces that shape our fates, and wonders how much free will we really have. Equal parts hilarious and poignant, The World Is a Narrow Bridge asks: What kind of hope can we pass on to the next generation in a frightening but beautiful world?


Praise For The World Is a Narrow Bridge…

"With deep tenderness and a wonderful, feather-light sense of humor, Mr. Thier rehearses ancient conundrums over free will and the existence of evil . . . The World Is a Narrow Bridge is genuinely religious, a book that looks at existence with equal measures of fear, humility and gratitude. In a time when novelists tend to be more concerned with psychology than the soul, that makes it a rare and valuable thing." - Sam Sacks, Wall Street Journal

"Thier is hilarious and provocative, his worldly insights sagely and frighteningly on the mark." - starred review, Booklist

"A rambling, innovative, cerebral, and wildly entertaining "trippy" journey that drives home essential questions while providing none of the answers." - New York Journal of Books

" 'Why is the world the way it is, and how can we accept it?' This is the question at the center of Aaron Thier's hilarious, absurd, and cosmically-attuned new novel. Along the way he invents a genre of his own: the American magic-realist road trip." - Karan Mahajan, author of THE ASSOCIATION OF SMALL BOMBS

"Thier has written a book for our particular moment in American history, and it's a testament to his amazing talent that he can pull the wreckage towards something beautiful . . . A wild, humane novel." - Kevin Wilson, author of PERFECT LITTLE WORLD

"Mr. Thier's dizzying time-travels will inevitably call to mind David Mitchell's Cloud Atlas, and the danger of such books is that they tend to grow solemn and sanctimonious as they peer into the future. Happily, Mr. Eternity remains playful even as it relates catastrophe." - The Wall Street Journal

"[A] sharp, inventive and compassionate novel . . . to be savored and heeded." - San Francisco Chronicle on MR. ETERNITY

"With symbolism and analogy, surrealism and fantasy, Thier deftly reflects on and explores the human condition through "the lavender light and sweet scented dust of history." Erudite. Imaginative. A work to be read slowly and savored." - Starred review, Kirkus Reviews on MR. ETERNITY

"[A] mordant and mischievous satire . . . The Ghost Apple does what satire is meant to do. It makes us laugh and it makes us think. Thier renders a deranged world that we recognize as our own." - Boston Globe on THE GHOST APPLE

Aaron Thier is the author of the novels Mr. Eternity, a finalist for the Thurber Prize for American Humor, and The Ghost Apple, a semifinalist for the Thurber Prize. A contributor to the Nation and a graduate of Yale University and the MFA program at the University of Florida, Thier received a 2016 NEA Fellowship in Creative Writing. He lives in Great Barrington, Massachusetts.
Loading...
or support indie stores by buying on
(This book is on backorder)