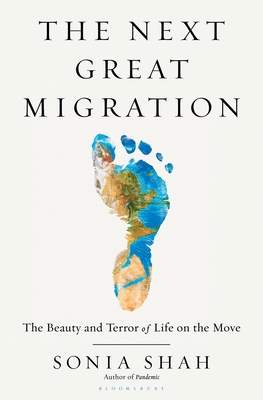 The Next Great Migration

The Beauty and Terror of Life on the Move

A prize-winning journalist upends our centuries-long assumptions about migration through science, history, and reporting--predicting its lifesaving power in the face of climate change.

The news today is full of stories of dislocated people on the move. Wild species, too, are escaping warming seas and desiccated lands, creeping, swimming, and flying in a mass exodus from their past habitats. News media presents this scrambling of the planet's migration patterns as unprecedented, provoking fears of the spread of disease and conflict and waves of anxiety across the Western world. On both sides of the Atlantic, experts issue alarmed predictions of millions of invading aliens, unstoppable as an advancing tsunami, and countries respond by electing anti-immigration leaders who slam closed borders that were historically porous.

But the science and history of migration in animals, plants, and humans tell a different story. Far from being a disruptive behavior to be quelled at any cost, migration is an ancient and lifesaving response to environmental change, a biological imperative as necessary as breathing. Climate changes triggered the first human migrations out of Africa. Falling sea levels allowed our passage across the Bering Sea. Unhampered by barbed wire, migration allowed our ancestors to people the planet, catapulting us into the highest reaches of the Himalayan mountains and the most remote islands of the Pacific, creating and disseminating the biological, cultural, and social diversity that ecosystems and societies depend upon. In other words, migration is not the crisis--it is the solution.

Conclusively tracking the history of misinformation from the 18th century through today's anti-immigration policies, The Next Great Migration makes the case for a future in which migration is not a source of fear, but of hope.


Praise For The Next Great Migration: The Beauty and Terror of Life on the Move…

"Shah offers a refreshing and crucially humane counterargument to the idea that migration spells societal catastrophe. Interweaving the human history of movement with parables from nature, she reframes migration not as an exception in an otherwise static world but instead as a biological and cultural norm—and one that should be embraced, not feared . . . a provocative invitation to imagine the inevitable migration of the future as an opportunity, rather than a threat." - Washington Post

"A fascinating study [that] debunks false narratives about immigration and finds that, in common with other species, the urge to move is written in our genes … That literature of track and trace, part detective story, part reportage, took Shah to remote corners of the world and to distant grid references of history … This book—a wandering narrative about why people wander—is likely to prove equally prophetic in the coming months and years, since it asks two questions that are already shaping our geopolitics: what causes human beings to migrate? And is such mass movement beneficial to more settled communities and nations?" - The Guardian

"Rich with eclectic research and on-the-ground reporting, Sonia Shah’s book presents us with a dazzlingly original picture of our relentlessly mobile species. At a moment when migrants face walls of hatred, this is a story threaded with joy and inspiration." - Naomi Klein, author of ON FIRE: THE BURNING CASE FOR A GREEN NEW DEAL

"The persistent differences between peoples--cultural, philosophical and physical--have made migration a perennially contentious matter, something Ms. Shah seeks to address with science, not sentiment . . . thoughtful and eloquent." - Wall Street Journal

"[Shah’s] book is a reminder that a more thoughtful approach to the beautiful, increasing movement of sentient beings is indeed close to our realm of possibility." - Boston Globe

"A thoughtful and thought-provoking defense of migration." - Science

"Countering the perception that today’s human and nonhuman migrations represent a global crisis, this engrossing book draws on history, interviews, and a wide range of scientific research to show that migration is 'an unexceptional ongoing reality.' " - The New Yorker

"A masterful survey of migration in both nature and humanity, countering some long-held misconceptions…a valuable treatise on how humanity can ‘reclaim our history of migration’ and adopt a more pan-global perspective." - Publishers Weekly (starred review)

"An incisive examination of migration, which she considers a phenomenon both biological and cultural…A scientifically sophisticated, well-considered contribution to the literature of movement and environmental change." - Kirkus Reviews (starred review)

"Illuminating . . . This work's beguiling synergy of science, history, and contemporary politics is impressive enough, but it is this intuitive author’s captivating narration that makes this such a bracingly intelligent and important title." - Booklist (starred review)

"Sonia Shah’s scientific and literary prowess can be felt in the way she dissects xenophobia as a crude immune response . . . It’s a nuanced idea with exacting detail that still maintains the pacing of a bullet train. . . . Readers initially drawn to her in-depth and meditative look at the nature of migration will stay for her storytelling." - Washington Independent Review of Books

"Shah convincingly argues that politicians against immigration distort and misuse data to create unnecessary and cruel barriers, [and that] we must face the inevitable: our social, political and ecological world is changing substantially. The altered communities that result won’t just be different, they’ll often be better adapted to thrive in our warming world." - Emma Marris, NATURE

"An ambitious work of journalism that argues migration has played a vital role in our planet’s history . . . Shah makes her case by moving nimbly between scientific history, scenes from her travels with ecologists, and occasional stories from refugees around the world . . . Shah has done a remarkable job, distilling complex ideas from a variety of disciplines into concise and elegant prose. She has a knack for summing up a big idea in a punchy sentence, but she also knows how to linger on a lovely scene, transporting the reader from the jungles of Hawaii to the Himalayan foothills." - Outside Magazine

"Arresting . . . Shah’s voluminous research shows that living things have been on the move for millennia, often improving the places where they land . . . a terrific work of science journalism and a valuable corrective to the latest wave of immigration hysteria sweeping Western nations." - Minneapolis Star-Tribune

"A level exploration of why migration has historically been viewed as dangerous, destructive and even unnatural, and how more recent data reveal movement as a natural part of life." - Discover Magazine, “5 Great Science Books to Read Right Now”

"Humans have always been a migratory species, and so are most other animals. In this striking look at a planet on the move, Sonia Shah provides a bold new way of looking at the ecological and political turbulence of our time--a vision that is as full of hope as it is of understanding." - Charles Mann, New York Times bestselling author of 1491

"In vivid detail, The Next Great Migration unfolds a conception of the relationship between life and place characterized by dynamic, almost continuous, processes of change. At once stunning in scope and intimate in its narrative unfolding, The Next Great Migration is a beacon for all those who strive to envision a future affected by climate change--a future in which migration is not a crisis but a solution." - Anna J. Secor, Durham University Professor of Geography and editor, CULTURAL GEOGRAPHIES

"Shah argues that migration is an inescapable part of life on earth and also represents our best shot at saving lives and diverse ecosystems as the world heats up." - Grist, “Who belongs where? A new way to think about migration”

"A hugely entertaining, life-affirming and hopeful hymn to the glorious adaptability of life on earth." - The Scotsman

"Meticulously researched, yet highly readable, this work presents a nuanced counterargument to the idea of a static world where each being belongs to a certain place . . . An interesting read that deals with a topic that is current and important to all. It will present a thoughtful challenge to many readers." - Library Journal

"A sweeping story of plants and animals and humans and how they move across the planet." - Shondaland

"A sweeping, vast look at us: where we've been, where we went, when we left, and how we got to where we are." - Bookworm Sez

"This is a book that captivates and educates on so many levels … it’s a work impeccably researched but heartfelt and driven by eloquent descriptive storytelling … Totally fascinating, and extremely well written, this is a book of our times and one all of us should take the time to read." - The Herald, Scotland

Sonia Shah is a science journalist and the prize-winning author of Pandemic: Tracking Contagions from Cholera to Ebola and Beyond, a finalist for the Los Angeles Times Book Prize and the New York Public Library Award for Excellence in Journalism. She has written for the New York Times, the Wall Street Journal, and many others. Her TED talk, “Three Reasons We Still Haven't Gotten Rid of Malaria,” has been viewed by more than one million people around the world. She lives in Baltimore, Maryland.
Loading...
or
Not Currently Available for Direct Purchase