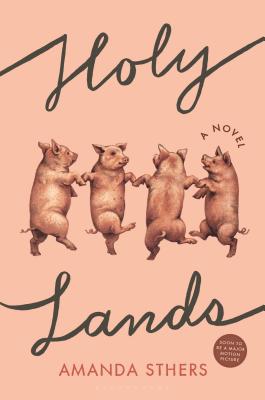 A witty, heartwarming, and heart-wrenching epistolary novel, soon to be a major motion picture starring James Caan, Rosanna Arquette, and Jonathan Rhys Meyers, about a dysfunctional family--led by a Jewish pig farmer in Israel--struggling to love and accept each other.

As comic as it is deeply moving, Holy Lands chronicles several months in the lives of an estranged family of colorful eccentrics. Harry Rosenmerck is an aging Jewish cardiologist who has left his thriving medical practice in New York--to raise pigs in Israel. His ex-wife, Monique, ruminates about their once happy marriage even as she quietly battles an aggressive illness. Their son, David, an earnest and successful playwright, has vowed to reconnect with his father since coming out. Annabelle, their daughter, finds herself unmoored in Paris in the aftermath of a breakup.

Harry eschews technology, so his family, spread out around the world, must communicate with him via snail mail. Even as they grapple with challenges, their correspondence sparkles with levity. They snipe at each other, volleying quips across the Atlantic, the Mediterranean, and Europe, and find joy in unexpected sources.

Holy Lands captures the humor and poignancy of an adult family striving to remain connected across time, geography, and radically different perspectives on life.

"Pithy, loaded letters and emails aimed at their vulnerable targets fly more like missiles than missives in Amanda Sthers' lively epistolary novel . . . Sthers’ book has the timing, wit, and warmth of a screwball screenplay that isn’t allowed to idle for more than a beat . . . Sthers captures her characters’ distinct voices and dueling positions with practiced concision and obvious relish." - NPR.org

“This is a book you can read in an afternoon, but it'll stick with you for much longer than that. Comic, moving, and occasionally profound, Sthers' novel is a delight.” —Kirkus Reviews, starred review

"Each letter in Holy Lands is a soliloquy about pain, separation, and belonging." - Washington Independent Review of Books

“This moving novel manages a delicate balance between humor and tenderness among a family incapable of interacting without rancor.” —Publishers Weekly

“Sthers is an expert at crafting dysfunctional families that remain touching and relatable. With Holy Lands, she's penned an irreverent and endearing reminder that blood is thicker than water.” —Karen Tanabe, author of The Gilded Years

“With eloquent Jewish humor, ironic taunts, familial reprimands, and cries from the heart each of the letters that form this gripping novel reveals a new secret, or asks a new question . . . Along the way we see that change is possible and that truth can be a brilliant vehicle of reconciliation. This book reminds us how intense, even pungent, all our letters, postal or electronic, should be.” —Grace Dane Mazur, author of The Garden Party

Amanda Sthers was born in Paris and lives in Los Angeles. She is the bestselling author of ten novels; this is her American debut. She is also a playwright, screenwriter, and director. Her debut English-language film, Madame, will be released in America in March 2018. In 2011, the French government named her a Chevalier (Knight) in the Ordre des Arts et des Lettres, the highest honor it bestows on artists, for her significant and original contributions to the literary arts.