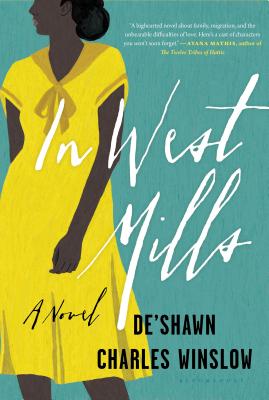 “Knot is a strong and independent woman in a rural town in North Carolina. She likes her liquor, and she will always speak her mind and regret none of it. She is one of many members of the community of West Mills that we get to know over the course of 40 years in De’Shawn Charles Winslow’s beautiful and feisty book about the love of family, friends, and neighbors. Though not always perfect and with a fair share of secrets, they always try to do what they believe is best for the ones they love.”
— Carl Kranz, Fountain Bookstore, Richmond, VA
View the List

"A bighearted novel about family, migration, and the unbearable difficulties of love. Here's a cast of characters you won't soon forget." Ayana Mathis, author of The Twelve Tribes of Hattie

"Winslow's impressive debut novel introduces readers to both a flawed, fascinating character in fiction and a wonderful new voice in literature." Real Simple, Best Books of 2019


Let the people of West Mills say what they will about Azalea “Knot” Centre; they won't keep her from what she loves best: cheap moonshine, nineteenth-century literature, and the company of men. And yet, when motherhood looms, Knot begins to learn that her freedom has come at a high price. Low on money, ostracized from her parents and cut off from her hometown, Knot turns to her neighbor, Otis Lee Loving, in search of some semblance of family and home.

Otis Lee is eager to help. A lifelong fixer, Otis Lee is determined to steer his friends and family away from decisions that will cause them heartache and ridicule. After his failed attempt to help his older sister, who lives a precarious life in the North, Otis Lee discovers a possible path to redemption in the chaos Knot brings to his doorstep. But while he's busy trying to fix Knot's life, Otis Lee finds himself powerless to repair the many troubles within his own family, as the long-buried secrets of his troubled past begin to come to light.

Spanning decades in a rural North Carolina town where a canal acts as the color line, In West Mills is a magnificent, big-hearted small-town story about family, friendship, storytelling, and the redemptive power of love.


Praise For In West Mills…

"From the first page, Winslow establishes an uncanny authority and profound tone that belie the book’s debut status. The precision and charm of his language lure us in and soothe us…He paints a community so tightknit and thorough it becomes easy to forget the people in it don’t exist… Much of the story is told through dialogue, rich and truthful conversations among characters reminiscent of those in August Wilson’s plays, expressing so much more than what is on the surface." - The New York Times Book Review

"Winslow’s quietly glorious novel is dedicated “To the reader,” and it engages on a level that’s appropriately intimate." - Boston Globe

"Winslow pens layers of complexity in a narrative that is surprising and irresistible at every turn... "In West Mills" is a refreshing and arresting book that shines a light on a woman who rebels against society's strict and unforgiving social norms, despite the costs." - The Atlanta Journal Constitution

"In West Mills is remarkable in its ability to create a fully realized world, the kind that feels like you must have visited before, a place where you'd happily spend all your time.... Winslow's writing is full of compassion and wit and generosity; he skillfully weaves together a story of the power of love and friendship, and their ability to redeem even the most troubled souls. This is the kind of book that leaves you smiling, with faith in humanity, and in art's ability to be gracious and redemptive." - Nylon

"Azalea Centre – known to the residents of her African American community in rural North Carolina as Knot – is one of the most memorable characters to come along in recent fiction." - Newsday

"It's impossible not to fall in love with Azalea "Knot" Centre, the star of In West Mills…In West Mills follows Knot, Otis Lee, their families, friends, and neighbors, from 1941 to 1987, exploring the bonds of friendship, the weight of secrets, and all of the sacrifices we make in our attempts to live a self-determined life." - Buzzfeed

"In West Mills offers a languid, hazy feeling, somewhat like walking barefoot down a dusty Carolina road on a summer’s day. It makes you want to linger." - The Philadelphia Tribune

"Winslow’s stellar debut follows the residents of a black neighborhood in a tiny North Carolina town over the course of several decades . . . Winslow has a finely tuned ear for the way the people of this small town talk, and his unpretentiously poetic prose goes down like a cool drink of water on a hot day." - Publishers Weekly, Starred Review

"De'Shawn Charles Winslow has a rare and blessed gift for writing characters who live and breathe and struggle and love one another and attain, in their imperfect, human way, a miraculous grace. The scope of this slim novel astonishes me: it encompasses an entire world." - Garth Greenwell, author of WHAT BELONGS TO YOU

"This tender, exuberant, and impressively crafted debut novel spans decades of family upheaval and painful secrets in telling the story of a freethinking black woman in a tightly knit Carolina community. . . in the brave, hard-bitten, but deeply vulnerable Knot, Winslow has created a character as memorable and colorful as any created by Knot's favorite writer, Charles Dickens." - Kirkus Reviews, Starred Review

"Reminiscent of August Wilson’s 10-play cycle marking each decade in 20th-century African-American history, In West Mills telescopes four decades into a densely packed drama. . . What distinguishes West Mill’s melodrama from episodic TV, however, is the real-life, unglamorous attitudes of ordinary people. . . . In West Mills exemplifies the timeless adage that it takes a village to raise one another. This is a historical fiction triumph." - BookPage, starred review

"Beginning in the 1940s and spanning 40 years, Winslow’s debut novel shares themes of acceptance and the importance of community through the eyes of a fierce, memorable anti-heroine . . . Winslow is a natural storyteller whose writing is like a mash-up of Zora Neale Hurston and Edward Kelsey Moore, and his characters spark to life, especially Knot, who Winslow magically makes both enraging and endearing. . . its humor and heart will win over many readers." - Booklist

"In West Mills by De'Shawn Charles Winslow is an enthralling debut from a masterful writer. Prepare to be captivated by the community of West Mills, with its deep secrets and even deeper friendships. I love this compassionate, profound book." - Helen Phillips, author of THE BEAUTIFUL BUREAUCRAT

"Reading In West Mills is like joining a new family, one you didn’t know you needed to be part of. De’Shawn Winslow’s stubborn, vivid characters will take over your imagination; you’ll worry about Knot’s drinking and Breezie’s wanting two of everything and the many women Otis Lee loves. And when you get to the end you’ll wonder how this short novel contains so many lives, so much wit and warmth. A stunning debut." - Margot Livesey, author of THE FLIGHT OF GEMMA HARDY

"In West Mills is full of vernacular riches. In it, De'Shawn Winslow and his characters show themselves to be masters of what Zora Neale Hurston referred to admiringly in African American expression as 'drama' and the 'will to adorn.' Readers won't be able to resist falling for the people who populate this striking debut novel, which is a treasure of humor, warmth, and wisdom." - Jamel Brinkley, author of A LUCKY MAN

De’Shawn Charles Winslow was born and raised in Elizabeth City, North Carolina. He is a 2017 graduate of the Iowa Writers' Workshop and holds a BFA in creative writing and an MA in English literature from Brooklyn College. He lives in New York.

1. Discuss the significance of character names and nicknames throughout the novel.

2. How important is the setting to the events depicted in In West Mills? As the book moves through time, how do characters’ behaviors reflect changing social mores and/or historical events that are not explicitly mentioned? How would this story be different if it did not begin in the rural South in the mid-late 20th century?

3. In Chapter One, why does Knot have such a sudden change of heart and throw Pratt out of her house after observing the previous night that being with him felt “better than before”? How might her life have been different if she had allowed Pratt to stay?

4. What is your feeling towards Knot as a character? Did your opinion of her change as the novel progressed? If so, when and why?

5. What was your reaction to Knot’s decisions to give up her children? Do you view her actions as selfish or altruistic?

6. Would you consider Knot to be an alcoholic? Discuss the impact her drinking has on her personal relationships. Do you think the people closest to her have a negative or positive influence on her drinking?

7. Knot’s favorite book is Charles Dickens’ The Old Curiosity Shop. How do the major themes of that novel (alienation, gender and family dynamics, poverty, single parenthood, addiction) resonate in her own life?

8. Compare and contrast the marriages and other romantic relationships depicted in the novel. Which couples or individuals do you most identify with, if any, and why?

9. Early on, Miss Noni tells Knot that sometimes keeping secrets is “best for everybody,” and later in her life Knot professes a similar opinion. Discuss how the idea of keeping a secret from someone for his or her own good plays out in the novel, particularly in relation to Knot’s children and Otis Lee. Do you believe that any of the secrets kept from the characters in In West Mills are justified? Why or why not?

11. Analyze Pep’s response to Otis Lee and Knot’s friendship. Was she justified in writing the letter to Knot’s family? Why or why not?

12. How does the “nature vs. nurture” debate play out in relation to Fran and Eunice? In what ways do they display similarities to Knot and to each other, despite having been raised in different families?

13. Compare and contrast Knot’s “chosen family” with her blood relatives. What can we infer about Knot’s upbringing based on the interactions we see between her and her parents? How are her feelings towards her parents reflected in her current behaviors? Did anything about Knot’s family members or her relationship with them surprised you? If so, what and why?

14. At one point Otis Lee observes that he’s watched women in his life, including Essie and Knot, “choose sadness.” Do you think this is an accurate description? Why or why not?

15. Throughout the novel, Knot displays a pattern of pushing people away. Why does she welcome Pratt upon his return?


The Twelve Tribes of Hattie by Ayana Mathis

The Turner House by Angela Flournoy

Their Eyes Were Watching God by Zora Neale Hurston

The Color Purple by Alice Walker