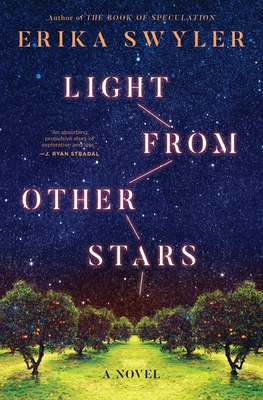 Light from Other Stars

From the bestselling author of The Book of Speculation, a “tender and ambitious” (Vulture) novel about time, loss, and the wonders of the universe.

Eleven-year-old Nedda Papas is obsessed with becoming an astronaut. In 1986 in Easter, a small Florida Space Coast town, her dreams seem almost within reach--if she can just grow up fast enough. Theo, the scientist father she idolizes, is consumed by his own obsessions. Laid off from his job at NASA and still reeling from the loss of Nedda's newborn brother several years before, Theo turns to the dangerous dream of extending his daughter's childhood just a little longer. The result is an invention that alters the fabric of time.

Decades later, Nedda has achieved her long-held dream and is traveling aboard the space ship Chawla, part of a small group hoping to colonize a distant planet. But as she floats in zero gravity, far from earth, she and her crewmates face a serious crisis. Nedda may hold the key to the solution, if she can come to terms with her past and the future that awaits her.

For fans of The Age of Miracles and The Immortalists, Erika Swyler's Light from Other Stars is a masterful and ambitious novel about fathers and daughters, women and the forces that hold them back, and the true meaning of progress.


Praise For Light from Other Stars…

“As smart and ambitious as its heroine, Light from Other Stars is an absorbing, propulsive story of exploration and loss.” —J. Ryan Stradal, author of KITCHENS OF THE GREAT MIDWEST

“A masterful story that hops through time to tell a tale of love and ambition, grief and resilience . . . It is full of joy and wonder, a reminder to never stop looking up into the stars and the infinite spaces in between them.” —Nylon

“Swyler's beautiful story, told in eloquent prose, induces shivers of wonder. This meditation on time, loss, and the depth of human connection is both melancholy and astonishing.” —Publisher's Weekly, starred review

“Swyler's new novel, Light From Other Stars, bends genres as it explores how the past intrudes on the present . . . Although Light From Other Stars includes plenty of science fiction elements, it's also a coming-of-age story . . . Juggling dual timelines, wonderful mid-1980s period details and a large cast of secondary characters, Swyler has set herself an ambitious task. But the novel is well-paced, with a satisfying twist near the end” —BookPage, starred review

“In Erika Swyler's glittering novel Light from Other Stars, Nedda has sky-high dreams of following in Judith Resnik's footsteps but finds herself subject to the reckless whims of others . . . Both external and internal landscapes-including Florida orange groves in sweltering demise, the constrictions of womanhood, and deep space-are rendered with precision . . . it elicits wonder and sadness in turn.” —Foreword Reviews

“A tender and ambitious journey through space and time, Light From Other Stars contains stunning twists and turns along the way from Nedda's childhood to her later life aboard a spacecraft on a mission bound for Mars.” —Vulture

“Only a writer who understands the human heart as well as she understands entropy and space travel can write a book like "Light from Other Stars" - science fiction for the rest of us.” —Newsday

“Exquisite prose in an ambitious novel told in two timelines . . . It's hard to imagine a sci-fi book so focused on pure, deep emotion while centered on the Earth and the wonders of space. Light from Other Stars hits big issues: loneliness, the bond between parent and child; grief; death and what happens to us after death . . . Plain and simple, I loved this book.” —Midwest Book Review

“Wonderfully imaginative . . . a poignant novel about the flawed but limitless love between parents and children. Swyler presses a deft finger on the fissures between art and science, love and loss, regret and hope, imprinting the reader's heart with an exquisite ache--the kind that lingers long after the story ends.” —Aline Ohanesian, author of ORHAN'S INHERITANCE

“At once expansive and strikingly intimate, Light from Other Stars is a story you won't be able to put down . . . This book is no less than a declaration that life is worth living, which makes it a vital book for our times.” —Adrienne Celt, author of INVITATION TO A BONFIRE

“A poignant, beautiful tale that perfectly captures humanity's timeless struggle to reconcile love and loss. As Nedda Papas faces mystery and danger both in the orange groves of her childhood and the vastness of space as an adult, Light from Other Stars keenly but tenderly illuminates the almost magical limits of science, the sacrifices that passion requires, and what it truly means to be a family.” —Peng Shepherd, author of THE BOOK OF M

“Dazzling. I absolutely loved this book. My only complaint is that I am already on the edge of my seat waiting for her next.” —Sara Gruen, on THE BOOK OF SPECULATION

“Mermaids, tarot card readers, a wild man and other carnival characters work their literary magic in this debut novel . . . packed with fresh, unexpected marvels.” —Oprah.com on THE BOOK OF SPECULATION

“A tale full of magic and family mystery, The Book of Speculation will keep you up all night reading.” —Buzzfeed, "The 24 Best Fiction Books of 2015," on THE BOOK OF SPECULATION

“Swyler has a tale to spin, and she does so with directness and wit.” —NPR.org, on THE BOOK OF SPECULATION

“While a book whose narrative hinges on drowning might not seem like a great beach read, Swyler's debut effort, redolent of salty ocean air, is just that . . . Its clever plot--fueled by a musty book and a powerful set of tarot cards--and Swyler's wonderful descriptions keep the pages swimming along.” —Entertainment Weekly on THE BOOK OF SPECULATION

ERIKA SWYLER is a graduate of New York University. Her short fiction has appeared in WomenArts Quarterly Journal, Litro, Anderbo.com, and elsewhere. Her writing is featured in the anthology Colonial Comics, and her work as a playwright has received note from the Jane Chambers Award. Born and raised on Long Island's North Shore, Erika learned to swim before she could walk, and happily spent all her money at traveling carnivals. She blogs and has a baking Tumblr with a following of 60,000. Erika recently moved from Brooklyn back to her hometown, which inspired the setting of the book. The Book of Speculation is her debut novel.

1. Discuss the juxtaposition of science and faith, whether religious or otherwise, as explored in the novel.

2. For readers who are old enough to remember the Challenger disaster, what are your memories of it? How does Nedda’s experience of it compare with your own?

3. What is the significance of setting the novel in a town called Easter?

4. What do Theo and Betheen’s personal passions and career paths reveal about their characters as individuals, as well as their marriage? What role do their scientific pursuits play in their roles as parents?

5. Do you view Theo’s motivation for building Crucible as altruistic or selfish? Why?

6. Discuss the ways in which Nedda’s feelings towards each of her parents evolves over the course of the novel. Are there specific moments you can point to when her attitude towards them shift? If so, when and why do these occur?

7. Throughout the novel, there are recurring instances of characters keeping secrets from or lying to other characters in order to protect them. Do you agree with this philosophy? Discuss some of these moments and whether you feel the characters should have behaved differently.

8. Kalpana Chawla was the first woman of Indian origin to go to space, and died along with the rest of her crew in the Columbia disaster of 2003, nearly two decades after the Challenger disaster. What is the significance of naming Nedda’s ship after her?

9. Swyler begins and ends Light From Other Stars by quoting the poem “High Flight” by John Gillespie Magee, a fighter pilot who was killed during World War II. How does this poem relate to events in the novel? In what ways, if any, do Nedda and the rest of her Chawla crewmates view themselves as soldiers?

10. Why does Nedda finally feel warm after her walk to Amadeus at the end of the novel?

Suggested reading: The Book of Speculation by Erika Swyler; The Martian by Andy Weir; Truth, Lies, and O-Rings: Inside the Space Shuttle Challenger Disaster by Allan J. McDonald; All the Light We Cannot See by Anthony Doerr; The Wanderers by Meg Howrey; The Settlers by Jason Gurley