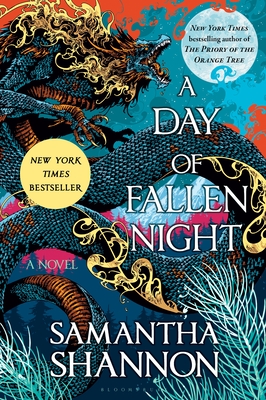 A Day of Fallen Night (The Roots of Chaos)

The stunning, standalone prequel to the New York Times bestselling The Priory of the Orange Tree.

In A Day of Fallen Night, Samantha Shannon sweeps readers back to the universe of Priory of the Orange Tree and into the lives of four women, showing us a course of events that shaped their world for generations to come.

Tunuva Melim is a sister of the Priory. For fifty years, she has trained to slay wyrms – but none have appeared since the Nameless One, and the younger generation is starting to question the Priory's purpose.

To the north, in the Queendom of Inys, Sabran the Ambitious has married the new King of Hróth, narrowly saving both realms from ruin. Their daughter, Glorian, trails in their shadow – exactly where she wants to be.

The dragons of the East have slept for centuries. Dumai has spent her life in a Seiikinese mountain temple, trying to wake the gods from their long slumber. Now someone from her mother's past is coming to upend her fate.

When the Dreadmount erupts, bringing with it an age of terror and violence, these women must find the strength to protect humankind from a devastating threat.


Praise For A Day of Fallen Night (The Roots of Chaos)…

“A magnificent, sweeping epic. Shannon has created a world rich in intricate mythology, beautifully realized and complex, and placed at its heart bold and vivid characters. Their journeys sweep the reader along, compelled by a thrilling plot of peril and warfare, but utterly captivated by the heartfelt relationships, the simmering romances, the betrayals, the loss and the love. Highly recommended for hiding away from the real world and losing yourself in this one instead” —Jennifer Saint, internationally bestselling author of Ariadne

“Epic in scope … The heroes shine in their uniqueness, with diverse family dynamics interwoven throughout and representation ranging from queer lords and warriors to genderfluid alchemists. ... This is expansive, emotionally complex, and bound to suck you in.”” —Kirkus Reviews, Starred Review

“Shannon artfully builds on the world of The Priory of the Orange Tree with this masterful standalone prequel. … it's an expansive epic … Shannon skillfully grounds high-stakes fantasy action in human emotion and a mature exploration of duty, bodily autonomy, identity, and motherhood. Series fans and any reader looking for queernorm fantasy will be thrilled by this self-assured adventure.” —Publishers Weekly Starred Review

“[A] fantasy trilogy in one volume, allowing for deep exploration of each protagonist as they navigate a brutal cataclysm. This richly detailed epic roars to a satisfying conclusion; both Priory devotees and newcomers are in for a treat.” —Booklist, Starred Review

“Fantasy fans, rejoice: The beloved Samantha Shannon is bringing readers back to the world of bestseller The Priory of the Orange Tree in this standalone prequel, A Day of Fallen Night. Set in the same universe as the feminist epic, steeped in dragonriders and intricate mythology, A Day of Fallen Night follows four women and the ways in which their choices shape Shannon's narrative forever.” —ELLE, 65 Best And Most Anticipated Books Of 2023!

“In this stunning epic fantasy, lush with detail and nuance, Shannon weaves a tale of three powerful women that intersect in the most thrilling ways. Huge in scope, rich with emotion, and gorgeously queer, A Day of Fallen Night is the Roots of Chaos book fans have been waiting for. Shannon is simply a master of the genre'” —C. S. Pacat, New York Times-bestselling author of Dark Rise

“Like a dragon in flight, Samantha Shannon takes you soaring through a tale full of fire and spirit. It is in that freefall that I fell utterly in love with these new characters. The novel draws strength from the power of a woman's choice, giving the characters a depth of fortitude that is masterful in its craft and execution. Shannon lays bare the intricacies of the world she's created with sublime skill, enrapturing the reader with political intrigue and momentous action, cleaved through with heart and passion. Simply put, Samantha Shannon hasn't just done it again, she's surpassed all that has come before and cemented herself as a legend of the genre.” —Saara El-Arifi, Internationally-bestselling author of The Final Strife

“Epic in scope, yet careful and tender in its depiction of personal grief, A Day of Fallen Night shows the heights of courage and depths of hope that people can find during terrifying, destruction chaos. A triumph of a book.” —Helen Corcoran, author of Queen of Coin and Whispers