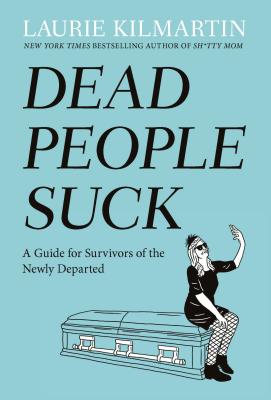 A Guide for Survivors of the Newly Departed

Death is not for the faint of heart, and sometimes the best way to cope is through humor. No one knows this better than comedian Laurie Kilmartin. She made headlines by live-tweeting her father’s time in hospice and her grieving process after he passed, and channeled her experience into a comedy special, 45 Jokes About My Dead Dad. Dead People Suck is her hilarious guide to surviving (sometimes) death, dying, and grief without losing your mind.

Praise For Dead People Suck: A Guide for Survivors of the Newly Departed…

“I don’t know how Laure Kilmartin managed to make this book both heart-breaking and hilarious, but she did. It’s honest and uncomfortable and brilliantly useful.”
—Cynthia Sweeney, New York Times bestselling author of The Nest

Laurie Kilmartin is an Emmy-nominated writer for CONAN and the co-host of podcast The Jackie and Laurie Show. Her hour-long special, 45 Jokes About My Dead Dad, was named one of the Best Comedy Specials of 2016 by Decider, Paste, and Vulture. As a stand-up comedian, she has appeared on CONAN, Last Comic Standing, Jimmy Kimmel Live, and Comedy Central.
Loading...
or support indie stores by buying on