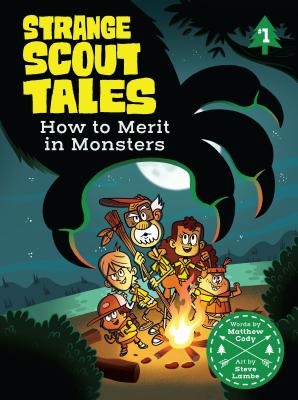 How to Merit in Monsters (Strange Scout Tales #1) (Hardcover)

The lowest-ranked Troop D (or Troop Dweeb, as the other troops refer to them) learns that their sleepaway camp is really a training ground for protecting the earth's most endangered species—monsters! Now these underdog troopers are next in line to earn their Monster Merit Badges.

Troop D is on a mission to rescue the legendary Big Foot, whose water supply has been contaminated. Luckily, with the help of their troop master and the ever-handy century-old Scout's Handbook, they might just have a chance!

MATTHEW CODY is the acclaimed children’s author of several popular books including the award-winning Supers of Noble’s Green trilogy: Powerless, Super, and Villainous. He lives in Manhattan with his wife and son.

STEVE LAMBE is an Emmy-winning character designer for TV and a children's book illustrator. Some of his work includes Nickelodeon's Golden Book series and shows such as The Fairly OddParents, Teen Titans Go!, and The Mighty B!

Praise For How to Merit in Monsters (Strange Scout Tales #1)…