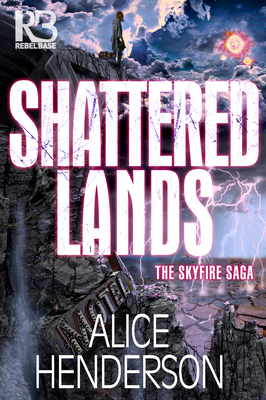 Environmental devastation has left Earth a wasteland, but an even more nightmarish fate looms if the woman known as H124 can’t stop an extinction-level asteroid from destroying the planet.

On the run from a dangerous media empire, H124 places her hope in learning more about the Rovers, the last bastion of humans to embrace science as a solution to Earth’s ongoing environmental catastrophe. But with the planet under imminent threat from plummeting asteroid fragments, H124 must take on a perilous new mission: find and assemble the pieces of an ancient spacecraft capable of pushing the deadly projectiles off course.

Her journey will lead her to the hurricane-ravaged remains of the east coast, and onto the brutal streets of Murder City, where she learns a startling secret about her own past. Death Riders and night stalkers prowl the badlands, but an even greater danger lurks above as H124 fights to build the craft that is humanity’s only hope for survival.

Alice Henderson is a writer of fiction, comics, and video game material. She was selected to attend Launchpad, a NASA-funded writing workshop aimed at bringing accurate science to fiction. Her love of wild places inspired her novel Voracious, which pits a lone hiker against a shapeshifting creature in the wilderness of Glacier National Park. Her novel Fresh Meat is set in the world of the hit TV series Supernatural. She also wrote the Buffy the Vampire Slayer novels Night Terrors and Portal Through Time. She has written short stories for numerous anthologies including Body Horror, Werewolves & Shapeshifters, and Mystery Date. While working at LucasArts, she wrote material for several Star Wars video games, including Star Wars: Galactic Battlegrounds and Star Wars: Battle for Naboo. She holds an interdisciplinary master's degree in folklore and geography, and is a wildlife researcher and rehabilitator. Her novel Portal Through Time won the Scribe Award for Best Novel. Visit her online at www.AliceHenderson.com.
Loading...
or support indie stores by buying on