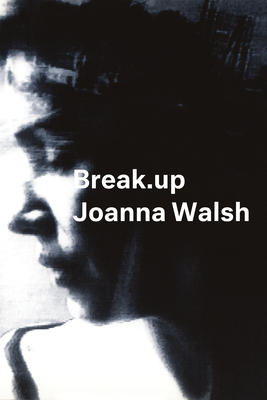 A novel in essays that locates a "romance" within the mesh of electronic communication.

So I didn't call you: instead I posted a new avatar of myself without my habitual dark glasses. I have learned: an image, any image, is a blind. All avatars give different information, illusions of contact called Telepresence, none of them the real thing. You texted me, 3 am, from some station ... As though it made any difference. But it did.
--from Break.up

In this "novel in essays," Joanna Walsh simultaneously flees and pursues an ambiguous partner in an affair conducted mostly online. Traversing Europe, she awaits emails and texts and PMs, awash in her dreams, offering succinct meditations on connection and communication. If Marguerite Duras situated the telephone as the twentieth century's preferred hopeless form of connection, Walsh pinpoints the nodal points of a "romance" within today's mesh of electronic communication.

As Deborah Levy observed recently, "Joanna Walsh is fast becoming one of our most important writers." Her 2015 book Hotel, an investigation of transience conducted through hotel reviews, was described by The Paris Review as "a slim, sharp meditation on hotels and desires. Walsh is] funny throughout, even as she documents the dissolution of her marriage and the peculiar brand of alienation on offer in lavish places."

"Hotel feels like something you want to endlessly quote: sharp, knowing, casually erudite ... there is power and an affecting gravitas in what Walsh does with detail."
--Sydney Review of Books

"Walsh is a sublimely elegant writer ... artful and intelligent."
--The New Statesman