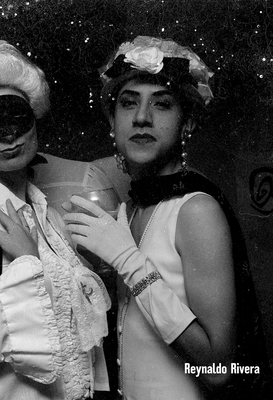 Provisional Notes for a Disappeared City

Throughout the 1980s and 1990s, Reynaldo Rivera took personal photos of the Los Angeles that he lived in and knew: a world of cheap rent, house parties, subversive fashion, underground bands, and a handful of Latino gay and transvestite bars: Mugi's, The Silverlake Lounge, and La Plaza. Most of these bars are long closed and many of the performers have died. But in Rivera's photographs, these men and women live on in a silvery landscape of makeshift old-style cinematic glamour, a fabulous flight from unacceptable reality.

As a teenager, Rivera took refuge in used bookstores and thrift stores, where he discovered old photo books of Mexican film stars and the work of Lisette Model, Brassai, and Bresson. Inspired, he bought a camera and began photographing people at his hotel. In 1981 he moved to Echo Park and began taking photos for the LA Weekly.

This book is an ensemble of almost 200 images selected by Hedi El Kholti and Lauren Mackler spanning more than two decades in Los Angeles and Mexico. The book also includes Luis Bauz's story, “Tatiana,” about one of the subjects of these photographs; a critical essay on Rivera's work by Chris Kraus; and a novella-length conversation between Rivera and his friend and contemporary Vaginal Davis about their lives, work, fantasies, and collective histories.


Praise For Reynaldo Rivera: Provisional Notes for a Disappeared City…

"Looking at Rivera’s pictures at the moment of pandemic makes the pleasure and community they portray seem that much more remote. And yet the horizon of inspiration remains."
—The Nation


"In his book, Rivera leaves behind an alluring yet candid record of interconnected communities at a moment in time.”—LA Times

Reynaldo Rivera is an artist from Mexicali, Mexico, who now lives in Los Angeles, where he documents the ongoing relationship between the city and its people.

Born and braised in Los Angeles, California, Vaginal Davis has been based in Berlin, Germany since 2005 where she has been a member of the art collective CHEAP since 2001. She is currently a guest professor teaching a performance seminar called Perverse Assemblages at Work Master HEAD Responsible du Department Arts Visuals, Geneva. She curates the performative film program Contemporary Vinegar Syndrome at Arsenal Institute für film und Video Kunst in Berlin.

Chris Kraus is the author of four novels, including I Love Dick and Summer of Hate; two books of art and cultural criticism; and most recently, After Kathy Acker: A Literary Biography. She received the College Art Association's Frank Jewett Mather Award in Art Criticism in 2008, and a Warhol Foundation Art Writing grant in 2011. She lives in Los Angeles.
Loading...
or support indie stores by buying on