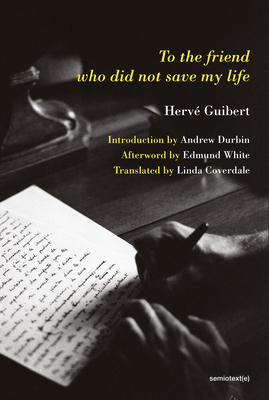 A novel that describes, with devastating, darkly comic clarity, its narrator's experience of being diagnosed with AIDS.

First published by Gallimard in 1990, To the Friend Who Did Not Save My Life describes, with devastating, darkly comic clarity, its narrator's experience of being diagnosed with AIDS. Guibert chronicles three months in the penultimate year of the narrator's life as, in the wake of his friend Muzil's death, he goes from one quack doctor to another, describing the progression of the disease and recording the reactions of his many friends.

The novel scandalized the French media, which quickly identified Muzil as Guibert's close friend Michel Foucault. To the Friend became a bestseller, and Guibert a celebrity. Guibert continued to document the daily experiences of his body in a series of novels and diaries, mostly published posthumously. To the Friend has since attained a cult following for its intimate and candid tone, its fragmented and slippery form. As Edmund White observed, “[Guibert's] very taste for the grotesque, this compulsion to offend, finally affords him the necessary rhetorical panache to convey the full, exhilarating horror of his predicament.” In his struggle to piece together a language suited to his suffering, Hervé Guibert catapulted himself into notoriety and sealed his reputation for uncompromising, transgressive prose.

"Guibert was a pioneer of autofiction and the author of this truly great AIDS novel, newly translated this year. The book is a lightly fictionalized (and magnificently indiscreet) account of the final days of the philosopher Michel Foucault, Guibert’s neighbor and friend. Guibert possesses an aloof, silvery style — a cool envelope for scalding material: a homage to a friendship and its betrayal, and a document of the breakdown of his own body. It is an unforgettable, heartbreaking evocation of the early days of the epidemic, when gay men were forced to become their own scientists, lobbyists, archivists."
—Parul Sehgal, the New York Times Book Review, one of the Top 20 Books of 2020

Hervé Guibert (1955–1991) was a writer, a photography critic for Le Monde, a photographer, and a filmmaker. In 1984 he and Patrice Chereau were awarded a César for best screenplay for L'Homme Blessé. Shortly before his death from AIDS, he completed La Pudeur ou L'impudeur, a video work that chronicles the last days of his life.
Loading...
or support indie stores by buying on