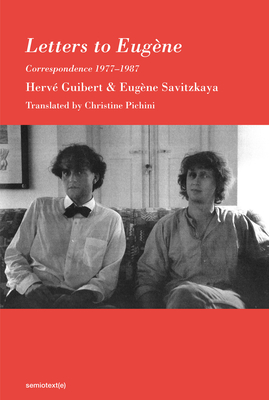 In 1977, Hervé Guibert discovered the first novel written by Eugène Savitzkaya, Mentir, and sent him his La mort propagande, which had just been published. In the following years, they exchanged the books they had written, read each other, appreciated each other. They saw each other rarely, however: one lived in Liège, the other Paris.

A turning point occurred in 1982, when Hervé published "Lettre à un frère d’écriture," in which he declared to Eugène, "I love you through your writing." The tone had changed; Hervé, obsessed with his correspondent, wrote him increasingly incandescent letters. 1984 would, however, see the sudden extinguishing of that passion. A deep friendship replaced it, which found itself with new areas to explore: the adventure of publishing L’Autre Journal and at the Villa Medicis, where they were both fellows. These nearly eighty letters, exchanged between 1977 and 1987, form a correspondence that is all the more unique for being the only one whose publication was authorized by Guibert. An intersection of life and writing, self and other, reality and fiction, their release is a renewal of Guibert’s oeuvre.

Hervé Guibert (1955–1991) was a writer, a photography critic for Le Monde, a photographer, and a filmmaker. In 1984 he and Patrice Chereau were awarded a César for best screenplay for L'Homme Blessé. Shortly before his death from AIDS, he completed La Pudeur ou L'impudeur, a video work that chronicles the last days of his life.

Eugène Savitzkaya is a French language poet, playwright, essayist, and novelist from Liège, Belgium. Born in Saint-Nicolas, Belgium, in 1955, he has written several books of poetry—including Les couleurs de boucherie and Bufo bufo bufo—and many theater pieces.
Loading...
or support indie stores by buying on