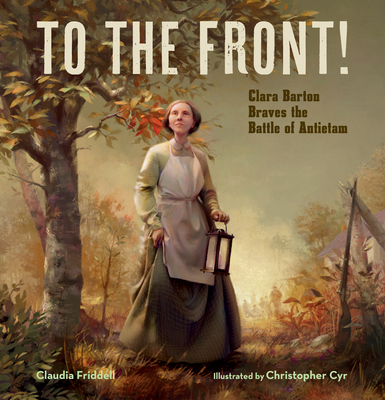 This powerful tribute to Civil War nurse Clara Barton and her heroic efforts during the Battle of Antietam reveals how she earned the name "The Angel of the Battlefield," and shows the beginnings of her journey as one of our country's greatest humanitarians and the founder of the American Red Cross.

During the Civil War, Clara Barton—one of the first women to receive permission to serve on a battlefield—snuck her supply wagon to the head of a ten-mile wagon train to deliver provisions to the Antietam Battlefield. On the bloodiest day in American history, Clara and her team of helpers sprang into action as they nursed the wounded and dying, cooked meals for soldiers, and provided doctors with desperately needed medical supplies and lanterns so they could operate through the night.

Author Claudia Friddell blends her words with Clara Barton’s firsthand account to capture the nurse’s brave actions, while Christopher Cyr’s dramatically accurate illustrations portray one of the most heroic women in history.

Praise For To the Front!: Clara Barton Braves the Battle of Antietam…

★ "In this riveting tribute to the 'Angel of the Battle-field,' Friddell mixes incantatory lyrics with matter-of-fact quotes from Barton...to capture a powerful sense of the battle’s fearful carnage and the courage required to plunge into it...An extended afterword that includes photos and further quotations adds biographical details and highlights Barton's...fervent support for both women’s suffrage and equal pay. Readers moved to learn more about this admirable figure will be well served by the closing list of resources." —Booklist, starred review

★ "Beautifully illustrated by Christopher Cyr, this picture book captures the 'Angel of the Battlefield' with realism and power. Cyr is a master at showing contrast between light and darkness, conveying Barton’s ability to be an agent of hope in the midst of despair...using repetition in the poetic text, emphasis is placed on Clara’s hands, her curious observations, and the endless cannon fire of the deadliest battle in American military history... a brilliant introduction to the Civil War for students of any age and demonstrates how one determined person can make a world of difference." —School Library Connection, starred review

"The story is told largely in Clara [Barton's] own clear and compelling words, augmented with concise and poetic third-person text. Soft-edge, digitally painted illustrations make great use of light, shadow, and perspective; they represent the story faithfully, including the surgeon’s ominous tools... A vivid window into a few bloody and exhausting days shows Barton’s unflinching bravery and inexhaustible dedication to helping those around her. Recommended." —School Library Journal

Claudia Friddell loves the magic of bringing history to life. She is the author of several acclaimed books, including Grace Banker and Her Hello Girls Answer the Call, Saving Lady Liberty, Goliath, and George Washington's Spies. She lives in Baltimore, Maryland.  Visit claudiafriddell.com.

Christopher Cyr is an award-winning freelance illustrator living in Massachusetts. A graduate of the Rhode Island School of Design's Illustration program, his illustrations are painted digitally in Adobe Photoshop. Some pieces integrate scanned sketches and watercolor textures.
Illustrator site: plaidcats.com
Loading...
or support indie stores by buying on