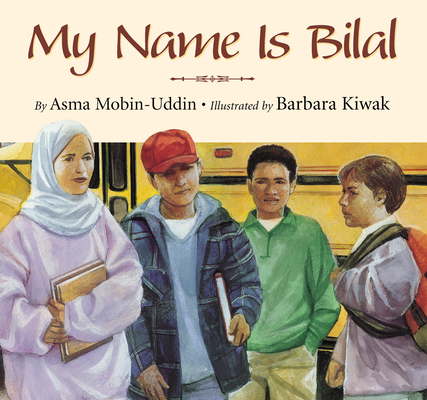 My Name is Bilal

A young boy wrestles with his Muslim identify until a compassionate teacher helps him to understand more about his heritage.

After a family move, Bilal and his sister Ayesha attend a new school where they find out that they may be the only Muslim students there. Bilal sees his sister bullied on their first day, so he worries about being teased himself, thinking it might be best if his classmates didn't know that he is Muslim. Maybe if he tells kids his name is Bill, rather than Bilal, then they will eave him alone. But when Bilal's teacher Mr. Ali, who is also Muslim, sees how Bilal is struggling. He gives Bilal a book about the first person to give the call to prayer during the time of the Prophet Muhammad. That person was another Bilal: Bilal Ibn Rabah. What Bilal learns from the book forms the compelling story of a young boy grappling with his identity.

Praise For My Name is Bilal…

"An important book for most libraries as it will enhance discussions of cultural diversity and understanding." — School Library Journal

"A good starting place for discussions of cultural differences, prejudice, and respect for the beliefs of others." — Booklist

"Tackles a timely topic and raises some true-to-life situations. . . . Does a good job of presenting encouraging, positive images that contemporary Muslims in particular can embrace." — Publishers Weekly

Dr. Asma Mobin-Uddin is a pediatrician and an active member of her local Muslim community. She decided to write about the Muslim-American experience because she had difficulty finding good books on this subject to read to her children.

Barbara Kiwak is a commercial illustrator whose clients have included Time-Life, Readers Digest, Highlights for Children, and The World Wildlife Fund. She has had numerous showings of her fine art in the Baltimore/Washington area, where she makes her home.
Loading...
or support indie stores by buying on