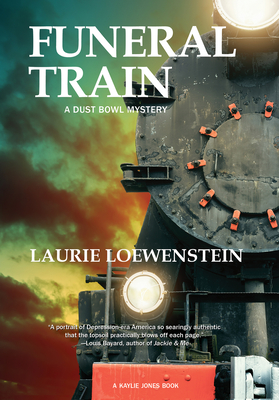 In her gripping follow-up to the widely acclaimed Dust Bowl Mystery Death of a Rainmaker, Laurie Loewenstein brings 1930s Oklahoma evocatively to life.

"Set in 1935, 'smack in the crosshairs of the Great Depression and the Dust Bowl, ' Loewenstein's excellent sequel to 2018's Death of a Rainmaker continues the saga of life in the small town of Vermillion, Okla . . . Loewenstein gives a rich sense of the period and place, and dramatically shows how hard times can bring out the best in some and the worst in others. Historical regional mysteries don't get much better than this."
--Publishers Weekly, starred review

"The sequel to Death of a Rainmaker . . . is just as atmospheric. The anguish and struggles of the Dust Bowl and Depression years are vividly depicted in this historical mystery."
--Library Journal

Already suffering the privations of the 1930s Dust Bowl, an Oklahoma town is further devastated when a passenger train derails--flooding its hospital with the dead and maimed. Among the seriously wounded is Etha, wife of Sheriff Temple Jennings. Overwhelmed by worry for her, the sheriff must regain his footing to investigate the derailment, which rapidly develops into a case of sabotage.

The following night, a local recluse is murdered. Temple has a hunch that this death is connected to the train wreck. But as he dissects the victim's life with help from the recuperating and resourceful Etha, he discovers a tangle of records that make a number of townsfolk suspects in the murder.

Temple's investigations take place against the backdrop of the Great Depression--where bootlegging, petty extortion, courage, and bravado play out in equal measure.

Laurie Loewenstein is the author of the novels Unmentionables and Death of a Rainmaker, the first in the Dust Bowl Mystery series and a finalist for a 2019 Oklahoma Book Award. She teaches at Wilkes University's Maslow Family Graduate Program in Creative Writing and is a fifth-generation Midwesterner.
Loading...
or support indie stores by buying on