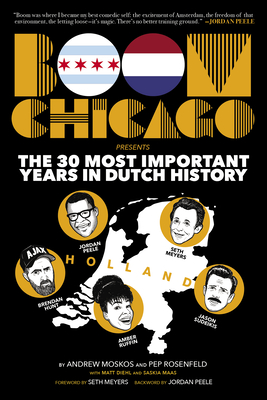 Boom Chicago Presents the 30 Most Important Years in Dutch History

"It's kind of crazy, the impact on culture so many Boom Chicago alums have had. Boom was where I became my best comedic self: the excitement of Amsterdam, the freedom of that environment, the letting loose--it's magic. There's no better training ground." --Jordan Peele

"Boom Chicago should have ended up on the scrap heap of 'Terrible Ideas Americans Have While Stoned in Amsterdam.' But when you stubbornly love one thing (comedy) as much as another thing (Amsterdam), you just believe they should be together. And here we are--thirty years later, Boom Chicago is alive and kicking." --Seth Meyers

"Working at Boom Chicago was an unbelievable experience. Thank goodness someone was smart enough to write it all down You're lucky 'cause you get to read about THE most exciting, fun, and illegal time I've ever had " --Amber Ruffin

What do Ted Lasso, Get Out, Late Night with Seth Meyers, 30 Rock, A Black Lady Sketch Show, Breaking Bad, Saturday Night Live, Girls5Eva, The Colbert Report, Inside Amy Schumer, Pitch Perfect, Key & Peele, The Daily Show, MADtv, Rick and Morty, The Amber Ruffin Show, Horrible Bosses, Portlandia, It's Always Sunny in Philadelphia, Suicide Squad, Superstore, How I Met Your Mother, Wicked, The Pee-Wee Herman Show, Brooklyn Nine-Nine, and Broad City all have in common? They all feature writers, creators, directors, or stars who got their start at Boom Chicago.

Having risen roughly to the middle of Chicago's cutthroat comedy scene, Andrew Moskos and Pep Rosenfeld decamped the Midwest for Amsterdam, Netherlands in 1993 to start their own improv comedy troupe, Boom Chicago. In a foreign land with zero tradition of English-language humor, Moskos and Rosenfeld unwittingly created the finishing school for some of today's most groundbreaking comedic talents. They (along with coauthors Matt Diehl and Saskia Maas) document this journey in the definitive oral history Boom Chicago Presents the 30 Most Important Years in Dutch History.

From its stages, Boom Chicago went on to launch cultural game changers like Seth Meyers, Jordan Peele, Amber Ruffin, Jason Sudeikis, Brendan Hunt, Ike Barinholtz, Kay Cannon, and Tami Sagher (and that's just a partial list). At Boom, these young upstarts honed their craft in front of unsuspecting foreign audiences and visiting dignitaries like Burt Reynolds, Run-DMC's Jam Master Jay, Dutch royalty, and the Netherlands's prime minister--all while navigating a world with legal weed and prostitution, annual holiday celebrations involving blackface, cookies with weird racist names, and football that has nothing to do with the NFL. From this culture shock, this collective created a more topical, inclusive, tech-savvy humor that would become the dominant comedy style of our time.

"The Groundlings. The Harvard Lampoon. Second City. These comedy institutions have been supplying Hollywood with a steady stream of talent for decades. Well, there's another name--almost as influential--that you've never heard of: Amsterdam's Boom Chicago. Huh?"--GQ

"A small theater in Amsterdam became the most influential American comedy factory you've never heard of . . . Boom alums have had a significant hand in many of the shows that defined the past two decades of comedy." --New York

Andrew Moskos is the cofounder and artistic director of Boom Chicago--the first ever English-language improv comedy theater in the Netherlands. Andrew also works on major business events and cowrote Dutch Prime Minister Mark Rutte's "most successful speech ever."Pep Rosenfeld is the cofounder and director of content for Boom Chicago. He received an Emmy nomination for his writing on Saturday Night Live's 2000-2001 season. Rosenfeld is also a stand-up comedian who got a laugh out of Barack Obama, and a public speaker known for his humorous TED Talks and interviews with thought leaders like Malcolm Gladwell. Matt Diehl is a journalist and author renowned for his contributions to the New York Times, Rolling Stone, the Washington Post, the Los Angeles Times, and Interview, among others. Diehl has also written/coauthored nonfiction books such as Notorious C.O.P. (with Derrick Parker), Drinking with Strangers (with Butch Walker), and My So-Called Punk, as well as publishing essays in anthologies spanning The VIBE History of Hip Hop to The Rolling Stone Album Guide. Saskia Maas is the CEO of Boom Chicago and the founder of Inter-Acting--an Amsterdam-based organization which helps autistic teenagers develop social confidence utilizing improvisation techniques.
Loading...
or support indie stores by buying on