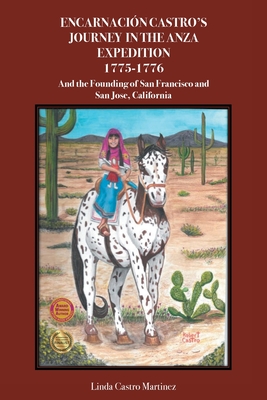 And the Founding of San Francisco and San Jose, California

Eight-year-old Encarnacion Castro embarked on a life-altering journey that challenged her endurance and resolve. Her life would never be the same. Encarnacion was a precocious eight-year old Mestiza (Spanish-Indian) child from Villa de Sinaloa, Nueva Espana. Intellectual curiosity and strength of will were her personal mantra. Encarnacion's family had been recruited as soldier-settlers in Lieutenant Colonel Juan Bautista Anza's Expedition of 1775-1776. On the expedition, her father was a "soldado de cuera," a leather-jacket soldier, who protected the expedition. After ten years of military service, the Spanish King promised land grants to those who served. The Anza Expedition's goal was to settle San Francisco, Alta California and to found a mission there. Stalked and attacked by Apache warriors, tested by hostile environments, burdened by the shortage of food and water, grief-stricken over the loss of loved ones, the Castro's 1800-mile journey defied human fortitude and expectations. There was no turning back for Encarnacion and her family. The Anza caravan, made up of 240 men, women and children, traveled over eight months. What began as a promising adventure for Encarnacion and her family, became an existential struggle.