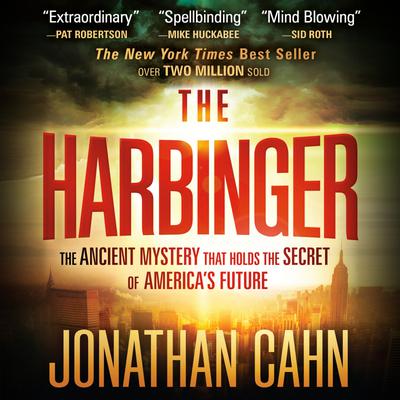 New York Times Best Seller for Over 100 Weeks Consecutively and Over 2 Million Copies Sold! Amazon.com's top 100 best-seller list for more than six monthsOver 79 weeks on USA Today's Top 150 Best-Selling Books7000 5-Star Reviews!From the author that brought you The Book of Mysteries, The Mystery of the Shemitah, and The Paradigm"Jonathan Cahn has come up with an understanding of a pattern in the Scripture for God’s judgment on ancient Israel being played out in the United States of America now. The Harbinger is the best explanation I’ve come across to understand the mystery of what’s behind 9/11, the war in Iraq, the crash of Wall Street, and much more. This end-time revelation puts him in a new category!"—Sid Roth | Author and host of It’s Supernatural and Messianic Vision"The Harbinger is the most precise scriptural revelation of God’s passion for America. We must heed the warnings and turn back to the Christ who once greatly blessed America!"—David Tyree | Former New York Giants wide receiverIs it possible...That there exists an ancient mystery that holds the secret of America's future?That this mystery lies behind everything from 9/11 to the collapse of the global economy?That ancient harbingers of judgment are now manifesting in America?That God is sending America a prophetic message of what is yet to come?Before its end as a nation, there appeared in ancient Israel nine specific warnings and omens of national destruction – These same nine Harbingers are now manifesting in America with profound ramifications for America’s future and end-time prophecy.Hidden in an ancient biblical prophecy from Isaiah, the mysteries revealed in The Harbinger are so precise that they foretell recent American events down to the exact days… the 3,000-year-old mystery that revealed the exact date of the stock market collapse of 2008… the ancient prophecy that was proclaimed from the floor of the US Senate and then came true…and more. The revelations are so specific that even the most hardened skeptic will find it hard to put down. Though it sounds like the plot of a Hollywood thriller – IT’S REAL.The prophetic mysteries are factual but revealed through a riveting narrative the reader will find hard to put down. The Harbinger opens with the appearance of a man burdened with a message he has received from a mysterious figure called The Prophet. The Prophet has given him nine seals, each containing a message about America s future. As he tells of his encounters with the Prophet, from a skyscraper in New York City, to a rural mountaintop, to Capitol Hill, to Ground Zero, the mystery behind each seal is revealed. As the story unfolds, each revelation becomes another piece in a larger and larger puzzle, the ramifications of which are, even now, altering the course of America and the world.

JONATHAN CAHN caused a worldwide stir with the release of his explosive first book, The Harbinger, which became an instant New York Times best seller and brought him to national and international prominence. His next four books were also New York Times best sellers, The Mystery of the Shemitah, The Book of Mysteries, The Paradigm, and The Oracle. Long before writing these books, he was known for opening the deep mysteries of Scripture and bringing forth messages of prophetic import. He leads Hope of the World, an international outreach of the word, teachings, and compassion projects for the needy around the world. He also leads the Jerusalem Center/Beth Israel, made up of people of all backgrounds, just outside New York City, in Wayne, New Jersey. Called the prophetic voice of this generation, Cahn is a much-sought-after speaker and has been highlighted in the New York Times as well as in many national and international media. He has spoken at the United Nations, on Capitol Hill, and to millions of people around the world.