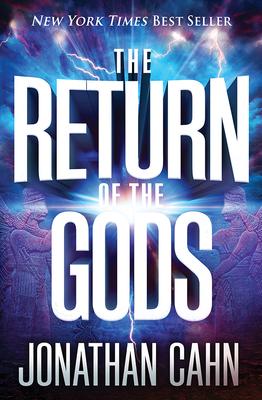 The Return of the Gods

NEW YORK TIMES Best Seller
From the author that brought you 6 New York Times best-selling books including The Harbinger, The Book of Mysteries, The Oracle and The Harbinger II
Is it possible that behind what is taking place in America and the world lies a mystery that goes back to the gods of the ancient world...and that they now have returned? The Return of the Gods is the most explosive book Jonathan Cahn has ever written. It is so explosive and so revealing that no description here could do it justice. Jonathan Cahn is known for revealing the stunning mysteries, many from ancient times, that lie behind and are playing out in the events of our times. But with The Return of the Gods, Cahn takes this to an entirely new level and dimension. The Return of the Gods, Cahn takes the reader on a journey from an ancient parable, the ancient inscriptions in Sumer, Assyria, and Babylonia that become the puzzle pieces behind what is taking place in our world to this day, specifically in America.

The mystery involves the gods. Who are they? What are they? And is it possible that these beings, whose origins are from ancient times, are the unseen catalysts of modern culture?

Is it possible that these gods lie behind the most pivotal events, forces, and movements taking place in our nation and around the world at this very moment? Are the gods at this very moment transforming our culture, our children, our lives, and America itself? Could this mystery have even determined the exact days on which Supreme Court decisions had to be handed down? What is the Dark Trinity? Is it possible that what we in the modern world take as nothing more than ancient mythology could actually possess a reality beyond our fathoming? Who is the Possessor? The Enchanter? The Destroyer? And the Sorceress? Could a sign that has appeared all over America and the world be linked to the gods of Mesopotamia? And if so, what does it actually mean? Could the gods have returned to New York City and an ancient mythology played out on the streets in real time? Is it possible that the gods lie behind everything from what appears on our computer monitors, our televisions and movie screens; to the lessons given in our classrooms; to the breakdown of the family; to wokism; to the occult; to our addictions; to the Supreme Court; to cancel culture; to children's cartoons; to every force and factor that has transformed the parameters of gender; to that which appears in our stores, on our T-shirts, and on our coffee mugs--to that which is, at this very moment, transforming America and much of the world? Is it possible that behind all these things are ancient mysteries that go back to the Middle East and ancient Mesopotamia? This and so much more, most of which we can't even reveal in this description, will be uncovered. Is it possible that the gods are even affecting your life right now? How can you recognize it? And what can you do about it? The Return of the Gods is not only one of the most explosive books you'll ever read but also one of the most profound. It will reveal the most stunning secrets and truths behind what is happening before your eyes in America and the nations. You will see things, even in your world, in a whole new light. With such chapters as "The House of Spirits," "The Avatar," "The Masters," "The Deep Magic," and "The Day of the Goddess," The Return of the Gods will take readers on a fascinating, unforgettable, and mind-blowing journey that will leave them stunned and with the ability to see the world as they never have before. Be prepared to be blown away as you open up Jonathan Cahn's most explosive book ever, The Return of the Gods

Jonathan Cahn caused a worldwide stir with the release of his explosive first book The Harbinger. The book became an instant New York Times best seller and brought him to national and international prominence. His next books were all New York Times bestsellers as well: The Mystery of the Shemitah, The Book of Mysteries, The Paradigm, The Oracle, and The Harbinger II: The Return. He was named, along with Billy Graham, one of the top forty spiritual leaders of the last forty years to have radically impacted the world. Called the prophetic voice of this generation, he has spoken on Capitol Hill, at the United Nations, and to millions of people around the world. He is known for opening the deep mysteries of Scripture and bringing forth messages of prophetic import. Cahn leads Hope of the World ministry, an international outreach of teaching, evangelism, and compassion projects for the world's most needy. He also leads the Jerusalem Center/Beth Israel, a worship center made up of Jews and Gentiles, people of all backgrounds, just outside New York City, in Wayne, New Jersey.
Loading...
or support indie stores by buying on