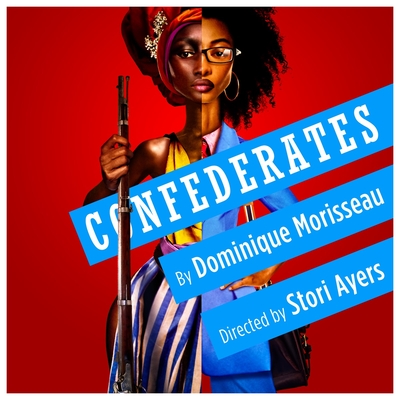 Dominique Morisseau's most radical play yet follows two Black women living more than a century apart as they struggle to free themselves from parallel systems of oppression.Confederates tells the story of two women in what at first appear to be radically different circumstances. Sara is an enslaved rebel ferrying information from her master's house to nearby Union soldiers. Sandra is a political science professor enduring misogynoir at a predominantly white university. As the play progresses, the line between the past and the present blurs, leading the audience to question how far we have come since 1865--and how far we still have to go.
In Morisseau's words, "I don't believe in the inhumanity of the enslaved." This play delves into serious themes with a satirical tone, never allowing the audience to forget the full complexity of enslaved people--their humor, their sexuality, and their intelligence--alongside their pain. In its thematic ambition and its finesse with sharply-contrasting tones, Confederates is a major work by one of America's most exciting playwrights.

Dominique Morisseau is the author of The Detroit Project, which includes the plays Skeleton Crew, Paradise Blue, and Detroit '67. Additional plays include Pipeline, Sunset Baby, Blood at the Root, and Follow Me To Nellie's. She is also the Tony-nominated book writer of the Broadway musical Ain't Too Proud - The Life and Times of the Temptations. Morisseau is an alumna of The Public Theater Emerging Writers Group, Women's Project Lab, and Lark Playwrights Workshop and has developed work at Sundance Lab, Williamstown Theatre Festival and Eugene O'Neill Playwrights Conference. She most recently served as Co-Producer on the Showtime series Shameless (3 seasons). She is the recipient of numerous awards, including the Steinberg Playwright Award, the NBTF August Wilson Playwriting Award, and the MacArthur "Genius" Grant.
Loading...
or support indie stores by buying on